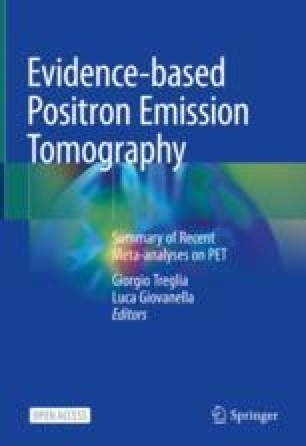 Haematological malignancies include lymphomas such as Hodgkin lymphoma (HL) and non-Hodgkin lymphoma (NHL), leukaemia and multiple myeloma (MM). They can affect any organ system and positron emission tomography/computed tomography (PET/CT) has been accepted as part of the routine management of most of them. In this chapter were only considered recent systematic reviews and meta-analyses concerning the use of PET or PET/CT with 18F-FDG in haematological malignancies dividing the results by the main areas of application.

Haematological malignancies include lymphomas such as Hodgkin lymphoma (HL) and non-Hodgkin lymphoma (NHL), leukaemia and multiple myeloma (MM). They can affect any organ system and positron emission tomography/computed tomography (PET/CT) has been accepted as part of the routine management of most of them. In this chapter were only considered recent systematic reviews and meta-analyses concerning the use of PET or PET/CT with 18F-FDG in haematological malignancies dividing the results by the main areas of application.

In staging HL and more aggressive NHL subtypes, 18F-FDG PET/CT was shown to be clearly more accurate than conventional radiological imaging to detect nodal and extranodal involvement. On the other hand, recent meta-analyses have addressed the diagnostic performance of this imaging method in some types of NHL, in MM and in the assessment of bone marrow involvement of HL and NHL [1, 2, 3, 4, 5, 6, 7, 8, 9].

Montes de Jesus et al. [1] evaluated the performance of advanced imaging modalities at diagnosis for post-transplant lymphoproliferative disorder (PTLD) after solid organ and haematopoietic stem cell transplantation. 18F-FDG PET/CT was the primary imaging modality investigated. Subgroup analysis of imaging results for detection and staging in patients with PTLD indicated that 18F-FDG PET/CT identified additional lesions not detected by conventional imaging in 27.8% of cases, from which extranodal sites in 23.6%. False negative results occurred in 11.5% of cases, predominantly in physiological high background activity regions and in early PTLD lesions. False positive results occurred in 4.8% of cases, predominantly due to inflammatory conditions. They concluded that 18F-FDG PET/CT is currently the most frequently investigated imaging modality in PTLD patients with promising results in detection and staging, but available studies suffer from methodological shortcomings.

Adams et al. [2] studied the additional value of 18F-FDG PET to CT for staging newly diagnosed follicular lymphoma (FL) in terms of Ann Arbor staging and Follicular Lymphoma International Prognostic Index (FLIPI) risk stratification. The proportion of patients who were upstaged by 18F-FDG PET compared with CT ranged from 0 to 45.2%, with a pooled summary proportion of 18.7% (95% confidence interval (95%CI): 10.8–30.4%). The single study that only included patients with CT-based limited non-bulky stage I to II disease reported 18F-FDG PET-induced upstaging in 40.5% of cases. No study reported data on the influence of 18F-FDG PET on FLIPI risk stratification. Although upstaging by 18F-FDG PET compared with CT occurs in a considerable proportion of patients, the available studies on this topic had numerous methodological errors. The authors concluded that future well-designed studies are needed before 18F-FDG PET can be recommended for routine pre-treatment staging of FL.

The same group of authors systematically reviewed and meta-analysed published data on the diagnostic performance of 18F-FDG PET/CT in detecting BMI in newly diagnosed HL to assess whether 18F-FDG PET/CT can replace blind BMB in these patients [5]. The pooled sensitivity and specificity of 18F-FDG PET/CT for the detection of BMI range were 96.9% (95%CI: 93–99%) and 99.7% (95%CI: 98.9–100%), respectively. The area under the ROC curve was 0.986. In conclusion, although the methodological quality of studies that were included in this systematic review and meta-analysis was moderate, the meta-analysis suggests that 18F-FDG PET/CT may be an appropriate method to replace BMB in newly diagnosed HL.

Cheng et al. [6] also carried out a meta-analysis to evaluate the performance of 18F-FDG PET and PET/CT against BMB in the initial diagnosis of BMI in patients with HL. Both 18F-FDG PET and BMB had excellent specificity in detecting BMI. However, 18F-FDG PET had excellent pooled sensitivity (94.5%; 95%CI: 89.0–97.8%) in detecting BMI in the initial staging of HL patients, whereas the pooled sensitivity of iliac BMB was very poor (39.4%; 95%CI: 30.8–48.4%). The authors concluded that 18F-FDG PET significantly outperforms iliac BMB in the detection of BMI in the initial staging of HL patients and therefore should be used as a first-line study.

9.3 18F-FDG PET or PET/CT in Treatment Response Evaluation (Interim and/or End of Therapy)

In the meta-analysis by Montes de Jesus et al. [1] on imaging modalities in PTLD, the subgroup analysis of imaging results at treatment response evaluation indicated that 18F-FDG PET/CT findings altered or guided treatment in 29% of cases. False positive results during treatment response evaluation were reported in 20% of cases, predominantly due to inflammatory conditions. They concluded that 18F-FDG PET/CT may be promising in therapy evaluation but suffers from methodological shortcomings. Concerns remain with regard to occurrence of false negatives due to physiological high background activity and early PTLD lesions as well as false positives due to inflammatory conditions.

Ziakas et al. [12] assessed the diagnostic performance of interim 18F-FDG PET with regard to the final outcome of adult patients with newly diagnosed HL. The pooled sensitivity was 67% (95%CI: 57–76%) and pooled specificity was 89% (95%CI: 84–93%). The estimated negative predictive value was 93% (95%CI: 85–100%). The diagnostic performance was influenced by most covariates tested, including age, duration of follow-up, criteria used and time of interim PET. In conclusion, the use of a PET-positive study as a surrogate marker was hampered by inconsistent interpretation criteria and study populations. However, the high negative predictive value may permit treatment stratification based on a negative outcome.

Wang et al. [13] carried out a meta-analysis to detect the prognostic power of 18F-FDG PET in the evaluation of pre-stem cell transplantation (SCT) and post-SCT in HL and NHL. For the pre-SCT PET or PET/CT, the combined hazard ratios (HRs) of PET for progression-free survival (PFS) and overall survival (OS) were 2.32 and 2.64, respectively. Subgroup analysis showed that the HRs of PFS for HL and NHL were 3.28 and 2.0, respectively. For the post-SCT PET scan, the combined HR for PFS was 4.61. The authors found that 18F-FDG PET was especially effective in predicting pre-STC and post-STC prognosis. The patients with a negative PET scan had a better prognosis compared with those with a positive scan for PFS and OS. In the subgroup analysis, 18F-FDG PET had a higher value in predicting prognosis before SCT for HL patients.

Liao et al. [19] evaluated the prognostic value of 18F-FDG PET/CT visual interpretation in patients with aggressive NHL. PFS and OS of PET/CT-positive patients were significantly lower when determined by the visual method. In subgroup analysis, International Harmonization Project (IHP), Deauville criteria, and having no standard interpretation groups were factors able to predict PFS; IHP and having no standard interpretation group were able to predict OS. With PET/CT, IHP and Deauville 5-point criteria, the PFS of patients receiving 2–4 cycles of chemotherapy before PET/CT was significantly lower than that of PET/CT-negative patients. No significant difference in OS was observed when patients received 3 or fewer cycles of chemotherapy before PET/CT, though OS was significantly lower in patients receiving more than 3 chemotherapy cycles. They concluded that interim PET/CT analysis after 3–4 chemotherapy cycles is capable of predicting disease prognosis in aggressive NHL.

Adams et al. [22] aimed to systematically review and meta-analyse the value of interim 18F-FDG PET in predicting treatment failure in HL. The area under the summary ROC curve was 0.877. Pooled sensitivity and specificity were 70.8% (95%CI: 64.7–76.4%) and 89.9% (95%CI: 88–91.6%). The overall prognostic value of interim PET appeared to be moderate for excluding and relatively high for identifying treatment failure in HL. However, they stated that interim PET cannot yet be implemented in routine clinical practice due to moderate-quality evidence and inter-study heterogeneity that cannot be fully explained yet.

Wang et al. [30] evaluated the prognostic value of maximum standardized uptake value (SUVmax), MTV, and TLG of baseline, interim and end-of-treatment 18F-FDG PET/CT parameters in ENKTL. SUVmax, MTV and TLG on baseline PET/CT were significantly associated with PFS and with OS. For the delta SUV (DS) on interim PET/CT, the HRs for PFS and OS were 5.15 (95%CI 2.71–9.80) and 5.8 (95%CI 2.28–14.73), respectively. Similarly, the DS on end-of-treatment PET/CT was a significant predictor of PFS and OS with HRs of 3.65 (95%CI: 2.13–6.26) and 3.32 (95%CI: 1.79–6.15), respectively. They suggested that SUVmax, MTV, TLG on baseline PET/CT, DS on interim PET/CT and DS on end-of-treatment PET/CT may be significant prognostic indicators for PFS and OS in ENKTL patients. Moreover, TLG tended to be superior to SUVmax and MTV on baseline PET/CT for predicting survival of ENKTL patients. Therefore, response monitoring and prognostication assessments based on multiple PET/CT parameters should be considered in the management of ENKTL patients.

Xie et al. [31] analysed whether SUVmax, MTV and TLG acquired from 18F-FDG PET/CT are predictors of prognosis of DLBCL. Combined results suggested a strong link between the high SUVmax, MTV and TLG values and the poor 3-year PFS with ORs of 2.59, 3.69 and 2.29, respectively. Similarly, high MTV and TLG values unfavourably influenced the 3-year OS with ORs of 5.40 and 2.19, respectively. The pooled results also showed that high SUVmax and MTV were negative predictors of PFS. The TLG value was not predictive of PFS. And for OS, only high MTV was a strong predictor of poor prognosis in DLBCL. Their results suggested that SUVmax and MTV may be significant prognostic markers for PFS and MTV may be the only predictor for OS in DLBCL.

9.6 18F-FDG PET or PET/CT in Comparison with Magnetic Resonance Imaging

Regacini et al. [33] aimed to compare WB-MRI with 18F-FDG PET/CT for lymphoma staging. WB-MRI and 18F-FDG-PET/CT agreed in 90.5% of the cases. In most of the studies, when there was disagreement between the methods, WB-MRI overstaged in relation to 18F-FDG PET/CT. The sensitivity of WB-MRI and 18F-FDG PET/CT, in comparison with the clinical-radiological standard, ranged from 59 to 100% and from 63 to 100%, respectively. The authors concluded that WB-MRI has excellent agreement with 18F-FDG-PET/CT and is a great alternative for managing lymphoma patients, without using ionizing radiation or an intravenous contrast agent.

Gariani et al. [34] evaluated the diagnostic performance of WB-MRI including diffusion weighted sequences (DWI) compared to whole-body CT or 18F-FDG PET/CT in patients with MM. WB-MRI detected more lesions than 18F-FDG PET/CT (sensitivity 68–100% versus 47–100%) but was less specific (specificity 37–83% versus 62–85.7%). Despite these insights the authors concluded that, because of the heterogeneity of the studies, future prospective trials should assess the impact of WB-MRI on management of MM.

Weng et al. [35] conducted a systematic review of the published literature to evaluate the diagnostic accuracy of 18F-FDG PET, 18F-FDG PET/CT, MRI and scintigraphy for MM-related bone disease. For 18F-FDG PET and PET/CT, pooled sensitivity and specificity were 91% and 69%, respectively. Statistically significant differences were not found in the sensitivity and specificity between MRI, scintigraphy, 18F-FDG-PET and PET/CT. In conclusion, the authors suggested that 18F-FDG-PET, PET/CT, MRI and scintigraphy are all associated with high detection rate of bone disease in patients with MM. Thus, in clinical practice, it is recommended that we could choose these tests according to the condition of the patient.

Overall, 18F-FDG PET or PET/CT appears to be a useful and accurate diagnostic tool for haematological malignancies in clinical practice from an “evidence-based” point of view. Some topics and results need further investigations in order to overcome methodological limits and clarify the real diagnostic role of this tool and its more appropriate position in the diagnostic flow chart.