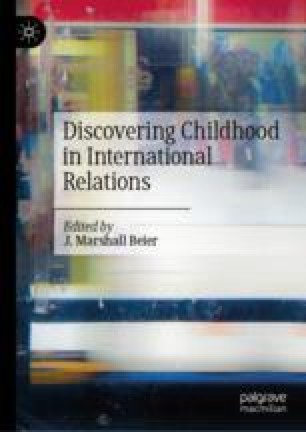 Between Borders: Pop Cultural Heroes and Plural Childhoods in IR

This chapter engages with the promise, problems, and prospects of studying childhood in disciplinary IR by exploring three questions: How might study of popular culture illuminate or obscure the roles that children and childhoods already play in world politics? Can it help us think holistically about the plurality of childhoods that IR might observe? How can we avoid foci that reproduce privilege and power asymmetries in world politics and in IR? In this chapter, an intergenerational, inter-racial, and cross-cultural research team adopts a “world-travelling” approach to remember and collectively deliberate on pop culture that was important to us in childhood. This approach disrupts the IR field’s often uncritical reliance on ‘credentialed’ voices and exclusionary knowledge-gathering and evaluating processes. Looking at the IR themes in the artifacts, practices, and ‘heroes’ that we recall as meaningful to us, we show how the ‘commonsense’ of IR is reproduced in and through children's lives. We also show how much is lost from the dominant IR narratives through the structural exclusion of diverse children’s perspectives and experiences and through failures of intergenerational curiosity and empathy. Our recollections reveal that children often are not protected, or are only partially protected, from world politics—from war, deportation, drugs, poverty, racism, and gangs—which is part of their everyday lives; and they use pop culture to help make meaning out of these experiences, and to shape how they/we act in the world. In integrating childhoods into IR, we need to be mindful of how children of color, including those in wealthy, donor states in the North are implicated, and of how the intersections in young lives of race, class, gender, and other identity factors can be fairly represented in the narratives of world politics.