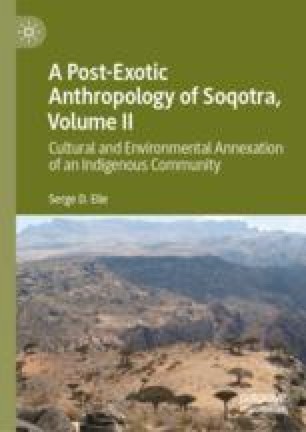 A Post-Exotic Anthropology of Soqotra, Volume II pp 27-70 | Cite as

The chapter focuses on the linguistic dilemmas faced by Soqotrans as an indigenous speech community under the Yemeni state’s deliberate absence of a policy toward the status of the Soqotri language within Yemen’s cultural patrimony. The state’s feigning non-existence of their indigenous language is the by-product of a cultural “protectionist ideology” that is shared by Arab states. This ideology postulates that an Arab ethnicity and the Arabic language are the exclusive bases of national polity formation. This leads to the non-recognition of the ethnolinguistic heritage of indigenous sub-national communities, as is the case with Soqotrans. This policy of neglect is exacerbated by a combination of involuntary and voluntary inducements to language replacement: such as, the political and cultural push of Arabic and the economic pull of English. Subsequently, the chapter elucidates the potential ramifications on the replacement of the Soqotri language through the following analytical tasks: First, it provides a synopsis on its discovery, etymology, genealogy, and recent attempts at its codification. Second, it explores the effects of the state’s lack of a language policy through a discussion of the range of conflicting attitudes that Soqotrans hold toward their language. Third, it examines the multiple threats to the maintenance of the Soqotri language. Finally, it performs a preliminary assessment of the Soqotran community’s ethnolinguistic vitality and suggests a menu of remedial initiatives to ensure its preservation.

A different version of this chapter was published under the title “Cultural Accommodation to State Incorporation in Yemen: Language Replacement on Soqotra Island.” Journal of Arabian Studies 2 (1) (2012): 39–57. Reprinted by permission of the publisher Taylor & Francis Ltd. http://www.tandfonline.com.