Coconut Biotechnology: Towards the Sustainability of the ‘Tree of Life’ 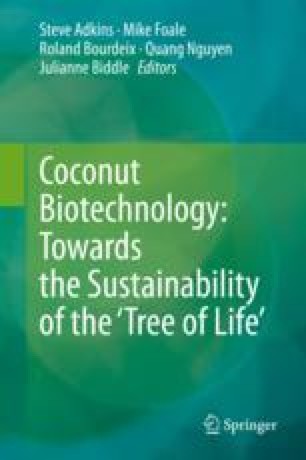 Coconut Biotechnology: Towards the Sustainability of the ‘Tree of Life’ pp 123-149 | Cite as

Coconut belongs to a typically South American subtribe (Attalinae), yet at the dawn of agriculture, it was in both the Indian and Pacific Oceans. How it reached this pre-historic distribution remains unclear. During the last 20 years, molecular markers have been developed to study coconut genetic diversity, assess gene flows and identify markers of agronomic traits. They have proven useful to identify coconut cultivars and to track genetic exchange between populations and human migrations. Two well-differentiated gene pools, originating from the Indian and the Pacific Oceans, were identified. Self-pollinating Dwarf coconuts resulted from a single domestication event in Southeast Asia. Markers for various agronomic traits were identified through linkage mapping and association studies. More recently, genome expression was studied in various organs, providing a representation of the coconut proteome and of its regulation, allowing to identify key genes involved in the metabolism of the endosperm and in somatic embryogenesis. Several research teams undertook its sequencing, and two draft sequences have been published. This large genome was recently assembled into 16 pseudomolecules by anchoring it on a linkage map. The biology of the coconut makes genetic improvement difficult. Genomic selection and marker-assisted selection can speed up the first stages of varietal development based on advanced generations of crosses between genetically distant populations. This will require profound changes in the methods used in field observation, aiming to acquire more phenotypic data at the individual level as well as the open availability of genomic resources.

The CGRD platform (“CGRD Version 6.1” 2012) offers a wealth of data on ex situ coconut genetic resource collections. It provides information on the microsatellite kit for coconut and data on allele frequencies in many cultivars. Much more complete is the coconut part of TropGeneDB (Hamelin et al. 2013; “Tropgene” 2013). It holds genotypic data on 1791 individuals using up to 30 microsatellite markers. The QTL section lists 63 QTLs for 15 traits, and the marker section documents 296 SSR markers, of which 72 are mapped (along with 196 AFLP and 6 RFLP markers).

PalmComparomics (Armero et al. 2017; “PalmComparomics” 2017) is devoted to comparative genomics of palms. It was constructed before the coconut genome sequence was available and uses the oil palm genome sequence (Singh et al. 2013), as its backbone. In this environment, the user can identify coconut genes matching a given sequence (blast) or, using a number of keywords (annotation terms, gene ontologies, etc.), explore coconut metabolic pathways and more. The site will be considerably enhanced once the coconut genome sequence is integrated. Of course, large amounts of data can be recovered from international databases such as NCBI (“National Center for Biotechnology Information” n.d.), DDBJ (“Bioinformation and DDBJ Center” n.d.) and EMBL-EBI (“The European Bioinformatics Institute < EMBL-EBI” n.d.) and various other specialized databases such as KEGG (“KEGG: Kyoto Encyclopedia of Genes and Genomes” n.d.) and many others.