Law, Security and the State of Perpetual Emergency 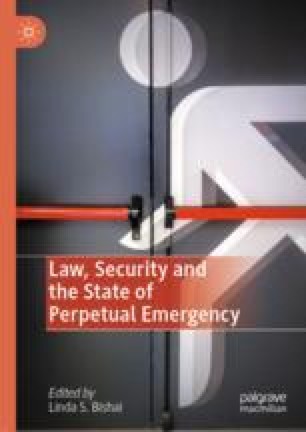 Law, Security and the State of Perpetual Emergency pp 207-233 | Cite as

Terrorism Prosecutions in the Specialized “Court” of Saudi Arabia

In addition to invoking states of emergency as an excuse to restrict fundamental human rights, states also resort to “specialized courts” with truncated due process rights in order to evade their legal obligation to ensure the right to a fair trial. While specialized courts can serve a legitimate function, those with irregular procedures are increasingly being used against activists and other government critics. Such courts are often established based on the pretext that they are needed to safely try terrorism suspects; in practice, however, the failure to adhere to due process makes it more likely that they will wrongfully convict innocent persons on the basis of unreliable evidence, such as forced confessions. In so doing, specialized courts can exacerbate the risk of radicalization and undermine public support for states’ counterterror efforts. The Specialized Criminal Court of Saudi Arabia is an example of the use of irregular procedures to persecute government critics and in so doing, the court has diverted resources from serious terrorism cases to spurious cases.

The views expressed herein represent the views of the authors. They have not been approved by the House of Delegates or Board of Governors of the American Bar Association and, accordingly, should not be construed as representing the position of the Association or its entities, including the ABA Center for Human Rights.

Cite this chapter as:
Benowitz B., Anderson V. (2020) Terrorism Prosecutions in the Specialized “Court” of Saudi Arabia. In: Bishai L. (eds) Law, Security and the State of Perpetual Emergency. Palgrave Macmillan, Cham