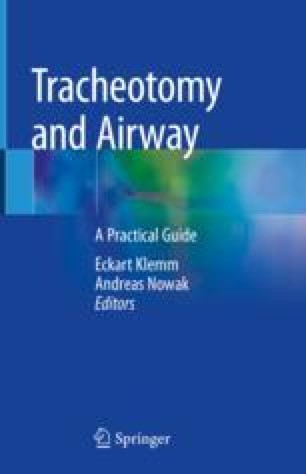 Tracheotomy and Airway pp 1-4 | Cite as

Tracheotomy When and Where?

The time for elective tracheotomies has been discussed for years in what has become very comprehensive literature by now. In this chapter, studies with high levels of evidence are taken into account and recommendations are given for the timing of tracheotomies in long-term ventilated patients, with the individual decision being at the center of consideration.

Tracheotomies can be performed both in the operating room and in an intensive care unit. The criteria for such choice are presented under interdisciplinary medical and organizational aspects.

In a meta-analysis, Griffiths et al. [1] found that out of 15,950 reports on tracheotomies only five studies were useful to answer the question of the optimal time for a tracheotomy. They recommended an early tracheotomy within the first 7 days, whereby the total duration of ventilation can be reduced.

Under the aspect of ventilator-related pneumonia and after a randomized controlled multicenter study, Terragni et al. [4] concluded that early tracheotomy after 6–8 days has no significant advantages compared to late tracheotomy after 13–15 days, whereas one third of patients suffered from PDT (percutaneous dilatational tracheotomy) complications, which is why fewer tracheotomies than necessary were found in later indications.

Reviews and statements bearing high-level evidence by ANZICS [5], Cheung et al. [6], Andriolo et al. [7] and Hosokawa et al. [8] indicate tendencies towards positive effects for some clinical pictures in connection with early tracheotomies up to the 10th day of ventilation. However, the general statement as to whether an early tracheotomy is superior to a later tracheotomy is not possible after detailed research by Raimondi et al. [9]. A tracheotomy should not be performed if the patient is dying or active treatment is being withdrawn or in case of refusal by the patient and/or guardian [10].

As the adjuvant intervention “tracheotomy” is also subject to discussion under medical law, the following applies according to current scientific findings:

The timing of an elective tracheotomy remains an individual decision, deliberating the risks and prospects of success. The current data situation does not permit a uniform recommendation for an optimal time of performing a tracheotomy in long-term ventilated patients.

In the consensus statement of the ANZICS [5], it was formulated:

“The timing of tracheostomy is the prerogative of the intensivist, dictated by the patient’s clinical status.”

1.2 Tracheotomy Where?: The Anatomical Relevance

Earlier textbooks differentiated between high, medium and low tracheotomies. This classification with respect to the location of the thyroid gland is obsolete, as is the earlier general recommendation to tracheotomize 1 cm below the cricoid cartilage (Chap.  3 “Anatomy and topography in relation to tracheotomy”).

Too high tracheotomies lead to later tracheal stenoses, too low tracheotomies are a risk for lethal bleeding according to Klemm and Nowak [11] (Chap.  10 “Complications of tracheotomy and strategies to avoid them”).

The question in which location a tracheotomy is to be performed can only be determined on the basis of the individual circumstances of the patient, the organizational possibilities on site and the complication density of methods.

Tracheotomies can be performed both in the operating room and in an ICU, provided that minimum personnel and technical standards are met, also to control complications.

The greater the multimorbidity, the more interdisciplinary the type and location of a tracheotomy should be determined solely on the basis of medical criteria.

The indication for tracheostomy in patients with SARS, when and where should be made as an individual decision by the intensive care team and the ENT surgeons involved. When making this decision, the patient’s prognosis, previous illnesses, current viral load, possible advantages of tracheostomy and the risk of infection of the medical staff must be considered. The treatment teams also have to adjust the right time for tracheostomy individually to the patient’s situation and local conditions. Although in the available literature regarding the high viral load, tracheostomy is favored as late as possible, practical (workload), but also medical aspects favor an early tracheostomy. A general determination of the ideal period of the indication is currently not possible [14, 15, 16].