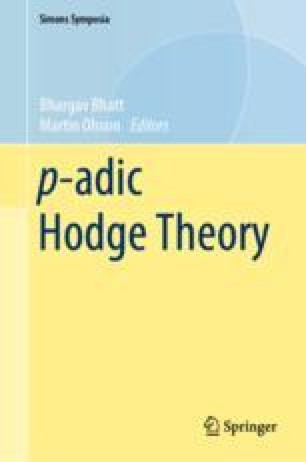 We present a detailed overview of the construction of the \(\mathbb A_{{\mathrm {inf}}}\)-cohomology theory from the preprint Integral p-adic Hodge theory, joint with Bhatt and Scholze. We focus particularly on the p-adic analogue of the Cartier isomorphism via relative de Rham–Witt complexes.

It is a pleasure to take this chance to thank my coauthors Bhargav Bhatt and Peter Scholze for the discussions and collaboration underlying [5], from which all results in these notes are taken. I am also grateful to the participants of the mini-course at l’IMJ on which these notes are based, including J.-F. Dat, C. Cornut, L. Fargues, J.-M. Fontaine, M.-H. Nicole, and B. Klingler, for their many helpful comments and insightful questions.

In light of the goal, it is sensible to recall the structure of modules over any two-dimensional regular local ring \(\varLambda \), such as \(\varLambda =\mathcal {O}_K[[T]]\) where \(\mathcal {O}_K\) is a discrete valuation ring. Let \(\pi ,t\in \varLambda \) be a system of local parameters and \(\mathfrak m=\langle \pi ,t \rangle \) its maximal ideal.

We have nothing to say about (i) here, and refer instead to [5, Lemma 4.6]. We will also only briefly comment on the remaining parts of the theorem, since these self-contained results may be easily read in [5, Sect. 4.2].

(iii) This is proved similarly to the analogous assertion in the previous remark.

(iv) This is proved exactly as the analogous assertion in the previous remark, once it is checked that the localisation \(\mathbb A_{{\mathrm {inf}},\langle p \rangle }\) is a discrete valuation ring.

We will also need the following to eliminate the appearance of higher Tors in the crystalline specialisation of the \(\mathbb A_{{\mathrm {inf}}}\)-cohomology theory: