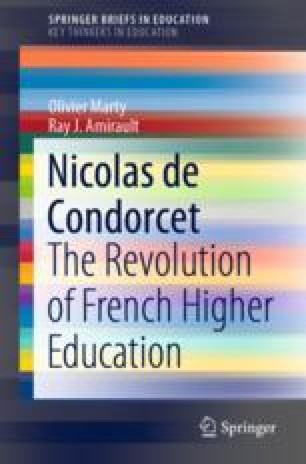 The “École Polytechnique”: Preparing the Technocracy

Chapter
Part of the SpringerBriefs in Education book series (BRIEFSEDUCAT)

In this chapter we present the École polytechnique as a school that embodied major changes as a direct result of the French Revolution. It was a bourgeois school that selected highly trained students in the field of mathematics. Condorcet envisioned this institution as a school where students learned techniques for developing specialized engineering in mines or bridges, civil works, and so on. This is what the French nation and its citizens were looking for during the French Revolution in order to expand the nation’s geographical connections. The school benefited from the Encyclopaedists of the eighteenth century who were attempting to transform the world through science. The school linked scientists and artists and aimed for technical learning goals. The school was quickly revised into a military school with a sense of hierarchy between social functions (that is to say, the advent of “bureaucracy”) and disciplines (mathematics being the most general at the top, with the applied sciences and technical skills depending on mathematical understanding). The school’s curricula were therefore oriented towards the physical sciences. The setting, as well as the school rites, was influenced by the army.

© The Author(s), under exclusive license to Springer Nature Switzerland AG 2020