Evolution of Marine Coastal Ecosystems under the Pressure of Global Changes 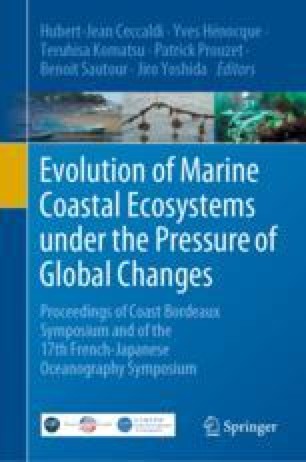 Blue shark (Prionace glauca) and shortfin mako shark (Isurus oxyrinchus) are recognized as pelagic sharks and highly migratory species, but these sharks appear in coastal areas. It is suggested that sharks migrate in the growth stage, but we do not know the details and how sharks use coastal areas. A fishing survey of these species in coastal areas like Sagami Bay is rare, and thus we carried out two types of longline operations to survey catch trends about the shark in Sagami Bay from August 2011 to July 2017: vertical and horizontal longline operations. Both species were caught throughout the year, with peaks in July and December for both blue sharks and shortfin mako sharks. Many of the male juvenile blue sharks caught had not reached sexual maturity, and pregnant blue sharks were also present among the females. The birthing period of blue sharks is reported to be from April to July, and the young are believed to be born and grow up in the open ocean of the North Pacific. However, the fact that we caught pregnant blue sharks close to giving birth suggests that they may give birth in coastal areas such as Sagami Bay. We were unable to catch young shark larvae because of the size selectivity of the longline fishing gear. Future studies, using net sampling, will be necessary to search for new-born blue sharks in this coastal area.