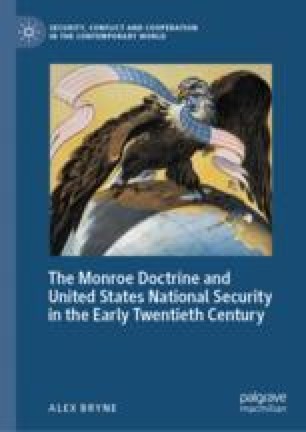 The Empire of the Monroe Doctrine

Chapter One explores the ways in which the American anti-imperialist movement invoked the Monroe Doctrine to protest the annexation of the Philippines. Anti-imperialists used the doctrine to differentiate between a structure, practice, and policy of imperialism that they believed to be consistent with American traditions, and one that was akin to European colonialism and antithetical to foundational American ideals, presenting an idealised vision of the form the United States Empire ought to take. This prompted the architects of the United States’ overseas empire to reconceptualise the doctrine and view it as a flexible and malleable policy that could accommodate historic shifts in United States foreign relations, setting the stage for a wider debate over its meaning and application.

Cite this chapter as:
Bryne A. (2020) The Empire of the Monroe Doctrine. In: The Monroe Doctrine and United States National Security in the Early Twentieth Century. Security, Conflict and Cooperation in the Contemporary World. Palgrave Macmillan, Cham