Cassirer’s Transformation: From a Transcendental to a Semiotic Philosophy of Forms 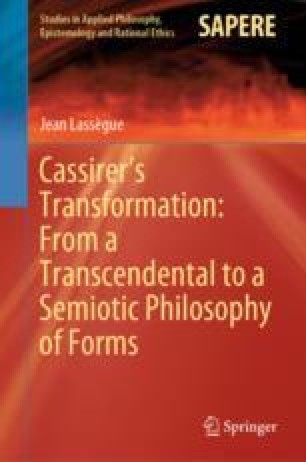 Cassirer’s Transformation: From a Transcendental to a Semiotic Philosophy of Forms pp 5-28 | Cite as

The Epistemological Situation of Cassirer

Contrary to what is sometimes claimed, there is no real “turn” from philosophy of science to philosophy of culture in Cassirer’s intellectual development: it is the internal evolution of Geometry and its consequences in Physics that lead Cassirer to broaden an essentially unique perspective. Before Cassirer became intellectually active, the emergence of non-Euclidean geometries had triggered a crisis in Mathematics that had consequences in Natural sciences as well as in Philosophy. The concept of group of transformation in Geometry (Klein) and the subsequent use of Riemanian geometry in relativity theory (Einstein) were responses to this crisis in Mathematics and Physics, respectively. The philosophical response to the crisis prompted Cassirer’s original concept of a “Symbolic Form”. From a transcendental perspective, his approach would transform the concept of objectivity into that of the various modes of objectivation. Thus, Cassirer’s philosophical project can be stated as follows: since some modes of objectivation that pertain to Mathematics have also meaningful consequences in Physics, it is possible to philosophically consider the very notion of the variety of modes of objectification and their possible transfers as the key concepts of meaning formation in general, thus transforming the transcendental perspective into a semiotic one. According to Cassirer, this transformation becomes the goal of the philosophical enquiry and can be studied in all cultural forms: Language, Mythical thinking, Law, Art or Technology, to name a few.

Non-Euclidean geometries Group of transformation Relativity theory Felix Klein Geometry and philosophy Transcendental perspective
This is a preview of subscription content, log in to check access.

Cite this chapter as:
Lassègue J. (2020) The Epistemological Situation of Cassirer. In: Cassirer’s Transformation: From a Transcendental to a Semiotic Philosophy of Forms. Studies in Applied Philosophy, Epistemology and Rational Ethics, vol 55. Springer, Cham