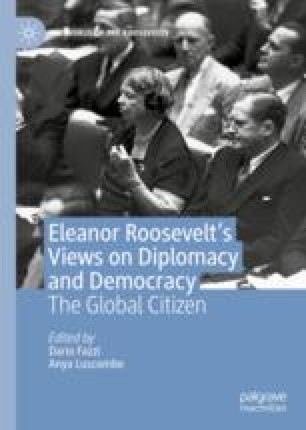 Liberalism Meets Radicalism: Eleanor Roosevelt and the Internationalization of the Black Liberation Struggle

This chapter analyzes Eleanor Roosevelt’s legacy as a civil rights activist. In particular, it focuses on the ways she addressed racial equality during the postwar years by looking at the events leading up to and surrounding the so-called Genocide Petition, a document drafted by the Civil Rights Congress under the supervision of William L. Patterson and presented to the United Nations (UN) in December 1951. During this period, American civil rights organizations submitted three petitions to the UN, all of which failed to receive the support of Eleanor Roosevelt. Three interrelated elements help to understand Mrs. Roosevelt’s reluctance to support these petitions. First, regarding civil rights, she was a pragmatist and a gradualist, which made her rather hesitant to cooperate with radical organizations. Second, the events leading up to the submission of the petitions happened against the background of the Cold War, which affected Mrs. Roosevelt’s public statements and political stances. And, third, while working at the UN as a US representative, she pursued her own personal agenda—the creation of human rights principles, backed up by an internationally binding human rights bill. In the end, by shunning support for the UN petitions, Mrs. Roosevelt further contributed to the widening of the division between moderates and radicals within the movement for Black liberation.

Cite this chapter as:
Kies T. (2020) Liberalism Meets Radicalism: Eleanor Roosevelt and the Internationalization of the Black Liberation Struggle. In: Fazzi D., Luscombe A. (eds) Eleanor Roosevelt's Views on Diplomacy and Democracy. The World of the Roosevelts. Palgrave Macmillan, Cham