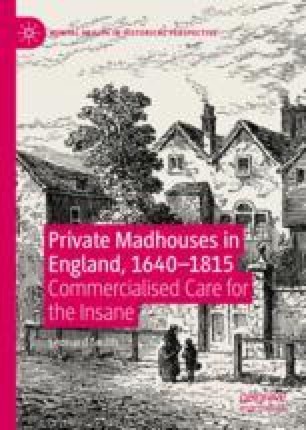 In this chapter, Smith demonstrates the emergence of private madhouses from the early seventeenth century onwards. He provides examples that indicate their mode of operation, both as businesses and as aspects of medical practice. The main concentration was in London, mostly to the north of the City, where the Hoxton district became prominent. Although the clientele emanated primarily from the middle and upper classes, it is shown that paupers were being received by the 1670s. Smith also highlights early documented examples of private madhouses and their proprietors in the provinces, particularly in the south-west of England. He argues that the basis of a national network of madhouses was largely in place by 1700.