Maple in Mathematics Education and Research 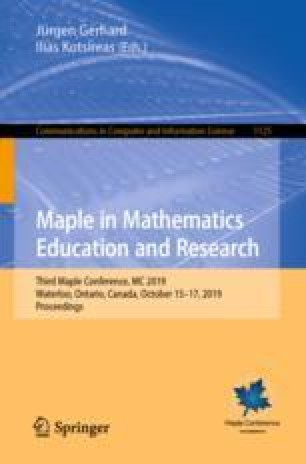 Dirac-notation based upper division undergraduate quantum mechanics was taught in the Spring semester of 2019 using Maple to present the mathematics of the course and to solve all mathematical and computational problems. In addition to step-by-step presentations on using Maple, students were provided with numerous examples of solving quantum mechanical problems using Maple. Students were required to submit all homework and “take-home” exam solutions as PDF documents, primarily generated from a Maple worksheet. However, students were not required to solve all problems using Maple. Through external evaluation and student survey, it was determined that by the end of the semester, all students used Maple for solving over half the problems; nearly three-quarters of the students developed sophisticated Maple skill sets; and a third of the students used Maple to solve every type of problem – completing assignments in a single worksheet. Maple was most frequently used to solve problems involving single variable continuous functions, vectors and matrices. Maple was least frequently used to solve problems involving Dirac-notation based algebra. Maple was nearly universally appreciated by the students.