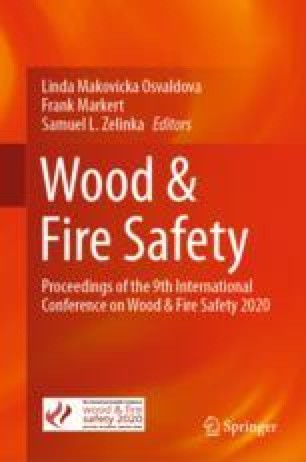 Various burning odors are signs of early fire and are perceived as fire by residents. Electronic noses were used to determine the odor qualitative changes during pyrolysis and oxidative pyrolysis of various combustible materials to clarify the possibility of fire detection using odor. The odor generated during combustion depends on the type of flammable substance in the house, so wood and plastic materials were targeted for flammable materials.

The precursors of odor during the beginning of pyrolysis and oxidative pyrolysis of house materials and also odor gas during the active period of those were defined as the standard odor gases, respectively. Using these odor gases as respective reference gases, it was used for proper selection and detection of odor fire gas generated during a model fire. These standard odor gases were then used as the fire test reference gas for the two-story model house fire test. Three types of model fire sources, a fast-growing fire, a plastic trash bin fire with wastepaper, and a wood crib fire with towels, were used as model fire sources. Comparison of the output from the fire detector already available with the measured odor change showed that the odor change was detected simultaneously with or immediately after the normal fire detector with a rapidly spreading fire. This situation was obtained because the fire sensor and odor sensor were in the same fire room. The change in odor on the second floor showed a sign of fire about 30 s before the fire was detected by the smoke and temperature rise type detector. When residual odors were present in the room, by making this odor level the reference level, it was possible to prevent false detection of fires by the odor sensor system.

This study was partly supported through a grant-in-aid for scientific research (Basic Research B, grant No. 15H02982) for the financial years 2015–2017. The authors sincerely thank to Mr. Satoshi Echigoya of Sugawa Laboratory, Suwa University of Science for his sincere contribution in conducting the tests.