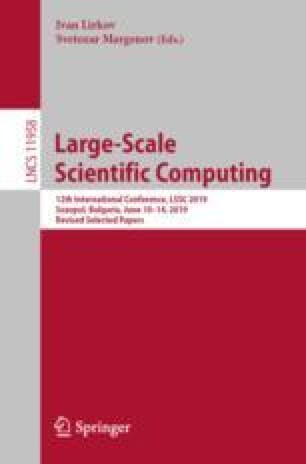 The performance of a hierarchical solver for systems of linear algebraic equations arising from finite elements (FEM) discretization of Fractional diffusion problems is the subject of this study. We consider the integral definition of Fractional Laplacian in a bounded domain introduced through the Ritz potential. The problem is non-local and the related FEM system has a dense matrix. We utilize the Structured Matrix Package (STRUMPACK) and its implementation of a Hierarchical Semi-Separable compression in order to solve the system of linear equations. Our main aim is to improve the performance and accuracy of the method by proposing and analyzing 2 schemes for reordering of the unknowns. The numerical tests are run on the high performance cluster AVITOHOL at IICT–BAS.

We acknowledge the provided access to the e-infrastructure of the Centre for Advanced Computing and Data Processing, with the financial support by the Grant No BG05M2OP001-1.001-0003, financed by the Science and Education for Smart Growth Operational Program (2014–2020) and co-financed by the European Union through the European structural and Investment funds.

This paper is partially supported by the National Scientific Program “Information and Communication Technologies for a Single Digital Market in Science, Education and Security (ICTinSES)”, contract No DO1–205/23.11.2018, financed by the Ministry of Education and Science in Bulgaria.

The reorder script should be run after the main.m script provided in [2]. The inputs used are:
The output of the algorithm is:

This algorithm picks from the upper left node of the solution domain \(\varOmega {\setminus } B\) as the first node \(p_1\). For the second node \(p_2\) it picks the neighbour node, where the vector \(\overrightarrow{p_1 p_2}\) has the minimum clockwise angle with vector that is at \(-45^\circ \) from the y axis. For the third node \(p_3\) we pick the neighbour of \(p_2\) that has the minimum angle \(\theta = \sphericalangle p_1 p_2 p_3\) and so on. If no neighbours are available (because we picked all of them) we search amongst all of the remaining unordered nodes. The MATLAB® code is below.

For the stripes reorder we again pick the first node \(p_1\) as the upper left node of the solution domain \(\varOmega {\setminus } B\). For the next \(p_2\) we pick the neighbour node that has the minimum angle with the Y axis \(\theta = \sphericalangle (\overrightarrow{Oy},\overrightarrow{p_1 p_2})\), but ignoring the nodes with angles \(\theta \in (\pi , 2\pi )\). When we reach a node with no unordered neighbours, we pick the left up node from the remaining nodes and continue.