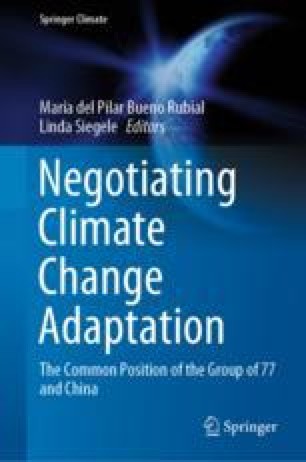 From the outset of negotiations on the UN Framework Convention on Climate Change (UNFCCC or Convention), AOSIS urged the global community to focus on the plight of those countries particularly vulnerable to the adverse effects of a changing climate system. While the ultimate objective of the UNFCCC focuses on the “stabilization of greenhouse gas concentrations” at a level which prevents dangerous human “interference with the climate system,” this objective is explicitly bounded by a timeframe that is based on adaptation parameters, i.e., the natural adaptation of ecosystems; maintaining global food production; and the continuation of sustainable economic development. The Bali Action Plan, negotiated in 2007 at COP 13 in Bali, Indonesia, marked a breakthrough on adaptation for AOSIS, with the clear separation it makes between the impact of the implementation of response measures and enhanced action on adaptation, a framing that has persisted under the UNFCCC to the present day. Despite the failure of the Copenhagen negotiations at COP 15 (2009), the Bali approach to adaptation led in 2010 to the establishment of the Cancun Adaptation Framework, the Adaptation Committee, the process for developing medium- to long-term national adaptation plans and the work program on loss and damage—each of which were outcomes strongly supported by AOSIS and depended on its close cooperation with the G77 and China. With the Paris Agreement, the issue of adaptation has been set legally “in stone” at the international level. And though the special needs and interests of individual members of the G77 and China add a seemingly insurmountable level of complexity to the equation of addressing adaptation, the rich history of positive change on adaptation that the joint effort of members of the G77 and China have managed to engineer is truly remarkable. AOSIS and its members are extremely proud of their contribution to the sum of this effort which is truly greater than its parts.