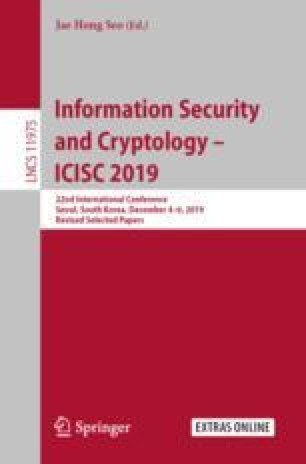 There Is Always an Exception: Controlling Partial Information Leakage in Secure Computation

Private Function Evaluation (PFE) enables two parties to jointly execute a computation such that one of them provides the input while the other chooses the function to compute. According to the traditional security requirements, a PFE protocol should leak no more information, neither about the function nor the input, than what is revealed by the output of the computation. Existing PFE protocols inherently restrict the scope of computable functions to a certain function class with given output size, thus ruling out the direct evaluation of such problematic functions as the identity map, which would entirely undermine the input privacy requirement. We observe that when not only the input x is confidential but certain partial information g(x) of it as well, standard PFE fails to provide meaningful input privacy if g and the function f to be computed fall into the same function class.

Our work investigates the question whether it is possible to achieve a reasonable level of input and function privacy simultaneously even in the above cases. We propose the notion of Controlled PFE (CPFE) with different flavours of security and answer the question affirmatively by showing simple, generic realizations of the new notions. Our main construction, based on functional encryption (FE), also enjoys strong reusability properties enabling, e.g. fast computation of the same function on different inputs. To demonstrate the applicability of our approach, we show a concrete instantiation of the FE-based protocol for inner product computation that enables secure statistical analysis (and more) under the standard Decisional Diffie–Hellman assumption.

This work was partially performed in the frames of the projects no. FIEK_16-1-2016-0007 and no. 2017-1.3.1-VKE-2017-00042, implemented with the support provided from the National Research, Development and Innovation Fund of Hungary, financed under the FIEK_16 and the 2017-1.3. funding schemes, and it was also partially supported by the National Research, Development and Innovation Office NKFIH, under grant contract no. 116675 (K). The first author was also supported by the Sándor Csibi Grant.

A Simulation Security of Functional Encryption

For completeness we recall the simulation security of FE as defined in [13].

B Proof of Theorem 2

We prove Theorem 2, by showing that the protocol of Fig. 5 fulfils the requirements of Definition 2 with the assumption that the underlying FE and OT are SIM secure against semi-honest adversaries. As correctness directly follows from the correctness of the underlying FE and OT, we turn our attention towards the security requirements. We argue input and weak relaxed function privacy by showing that the view of both parties can be simulated (without having access to the inputs of the other party) using the simulators guaranteed by the SIM security of FE and OT.

Now we show the indistinguishability of the real and simulated views. As the inputs and outputs are the same in both cases, we have to compare the randomness and the incoming messages. First notice that \(\mathsf {pp_{FE}}\) and \(\mathsf {pp_{FE}}^*\) are generated with different random choices. At the same time, these cannot be told apart as otherwise the choices were not random. The rest of the incoming messages depend on these parameters. Observe that \(I^* = I \cap [k]\). The security of the used FE scheme guarantees that \((\mathsf {ct}_1^*,\ldots ,\mathsf {ct}_d^*)\) even together with functional keys \(\lbrace \mathsf {fsk}_{f_{i}}^* \rbrace _{i\in I^*}\) are indistinguishable from \((\mathsf {ct}_1,\ldots ,\mathsf {ct}_d)\) with \(\lbrace \mathsf {fsk}_{f_{i}} \rbrace _{i\in I \cap [k]}\). Finally, the security of the OT simulation guarantees that \((\mathsf {msg_{1}^{OT}},\ldots ,\mathsf {msg_{\kappa }^{OT}})\) and \((\mathsf {msg_{1}^{OT}}^*,\ldots ,\mathsf {msg_{\kappa }^{OT}}^*)\) are indistinguishable. This also implies that functional keys for the same functions (with respect to either \(\mathsf {pp_{FE}}\) or \(\mathsf {pp_{FE}}^*\)) can be obtained both from the real and simulated OT messages. In other words, FE ciphertexts and functional keys are consistent in both cases (i.e. they allow one to obtain the same decryption outputs) due to the correctness of the FE simulation, which concludes our proof.    \(\square \)