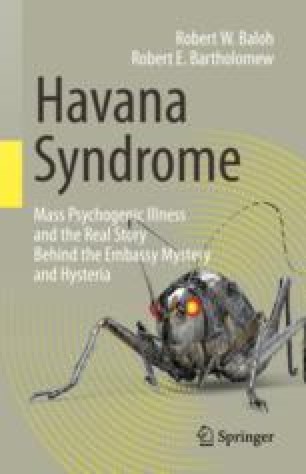 This chapter provides a broad overview of a mysterious novel clinical entity featuring mild brain damage and an array of cognitive deficits that reportedly afflicted American and Canadian diplomats stationed in Havana, Cuba, beginning in November 2016. While explanations for what has been dubbed ‘Havana Syndrome’ range from acoustical weapons to microwaves, and even pesticide exposure, these hypotheses are inconsistent with the evidence. Furthermore, the irregular patterning of the episode is inconsistent with an infectious disease agent, but instead closely follows social networks. Unfortunately, US State Department doctors opted for the most exotic hypothesis early on – that they were the victims of a secret sonic weapon from a hostile government, while ignoring mundane explanations. While many diplomats reported hearing an unusual sound accompanying their symptoms, an analysis of recordings of ‘attacks’ identified them as crickets and cicadas. The result is one of the strangest stories in the history of science: insect mating calls were mistaken for a sonic attack, engendering anxiety and triggering an outbreak of psychogenic illness that has damaged Cuba-American relations. The financial toll has been high, with the US government spending millions of dollars and tying up valuable resources to investigate this case while costing the Cuban government tens of millions of dollars in potential tourist revenue from negative publicity.