Ethics, Society and Politics: Themes from the Philosophy of Peter Winch 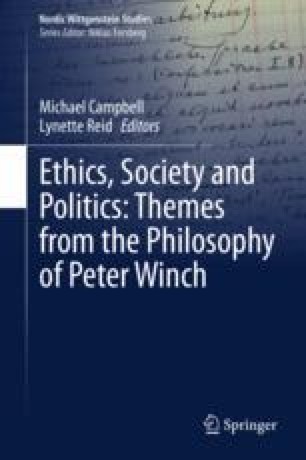 Ethics, Society and Politics: Themes from the Philosophy of Peter Winch pp 271-279 | Cite as

I examine the tension between Peter Winch’s thoughts on animal minds in his early work The Idea of a Social Science (ISS) and his much later interpretation of Wittgenstein’s famous remark in the Philosophical Investigations (PI), that ‘My attitude to him is an attitude towards a soul.’ In ISS Winch claims that animals, his example is of dogs, cannot go on in the same way, cannot learn to follow a rule. Winch says, for example, as far as the dog goes, there can be no question of the ‘reflective application of criterion.’ But I want to ask, drawing on Winch’s own later interpretation of the above passage from PI, whether in a great many of our relations with certain animals, there is any question of our ‘reflective application of criterion.’ To put the point slightly differently, is what counts as, in Winch’s words, ‘always doing the same kind of thing when the word of command is uttered’ really decided at all, decided as I will argue in advance, by either party in this shared activity? The reference to a shared activity is important here. For the way in Winch makes his point throws into doubt the idea that there is in a case like this (with an animal) any such thing as a shared activity. Using an example of the way in which children play games with dogs, I will suggest that such doubt is misplaced, that indeed in such games, for example in the game of fetch, animals may themselves provide their own innovations as to what counts as going on in the same way.