Language and Automata Theory and Applications 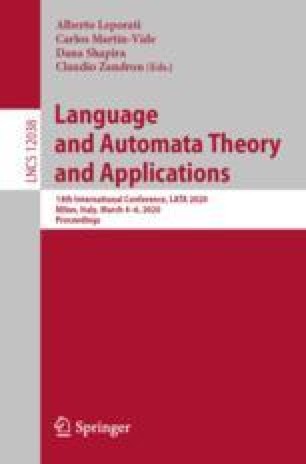 International Conference on Language and Automata Theory and Applications

Every language in NL has a k-head two-way nondeterministic finite automaton (2nfa(\(k\))) recognizing it. It is known how to build a constant-space verifier algorithm from a 2nfa(\(k\)) for the same language with constant-randomness, but with error probability Open image in new window

that can not be reduced further by repetition. We have defined the unpleasant characteristic of the heads that causes the high error as the property of being “windable”. With a tweak on the previous verification algorithm, the error is improved to Open image in new window

, where \(k_{\text {W}}\le k\) is the number of windable heads. Using this new algorithm, a subset of languages in NL that have a 2nfa(\(k\)) recognizer with \(k_{\text {W}}\le 1\) can be verified with arbitrarily reducible error using constant space and randomness.

Probabilistic Turing machines (PTM) are classical Turing machines with randomness as a resource. These machines alone can be recognizers of a language, or be verifiers for the proofs of membership in an interactive proof system (IPS). In either scenario, a noticeable error might be incurred in machines’ decisions due to randomness involved in their execution. This error can usually be reduced via repeated execution in PTM’s control.

The class of languages verifiable by the constant-randomness two-way probabilistic finite automata (2pfa) is the same as NL, the class of languages recognizable by the nondeterministic sub-linear space Turing Machines. Curiously, however, the error of these verifiers in recognizing languages of this class seems to be irreducible beyond a certain threshold [6].

In this paper, we introduce a characteristic for the languages in NL. Based on this characteristic, we lower the error threshold established in [6] for almost all languages in NL. Finally, we delineate a subset of NL in which each language is verifiable by a constant-randomness 2pfa with arbitrarily low error.

The remaining of the paper is structured as follows: Sects. 2 and 3 provides the necessary background as well as our terminology in the domain. A key property of the multi-head finite automata is identified in Sect. 4. Our verification algorithm, which improves on Say and Yakaryılmaz algorithm, and a subset of NL on which this algorithm excels are described in Sect. 5.

The following notation will be common throughout this paper:

Machine M is said to execute on a string \(w \in \varSigma ^*\), when \(\triangleright w \triangleleft \) is written onto M’s tape, all of its heads rewound to the cell with \(\triangleright \), its state is reset to \(q_0\), and then it executes in steps by the rules of \(\delta \). At each step, inputs to \(\delta \) are the state of M and the symbols read by respective heads of M.

A k-headed automaton running on an input w of length n has \(n^k\) distinct configurations. Additional k heads can count up to \(n^k = (nnn\dots n)_n\), and halt the machine with a rejection.

Every 2nfa(\(k\)) can be converted into an equivalent 2nfa(\(k\)) which does not move its heads beyond the end markers.

Conversion in Lemma 3 is done via trivial modifications on the transition function.

A 1nfa(\(k\)) is a restricted 2nfa(\(k\)) that does not move its heads backwards on the tape. In its definition, Open image in new window

A string w is in \(\mathcal {L}\left( M\right) \), iff M accepts w with a probability greater than Open image in new window

An interactive proof system (IPS) models the verification process of proofs. Of the two components in an IPS, the prover produces the purported proof of membership for a given input string, while the verifier either accepts or rejects the string, alongside its proof. The catch is that the prover is assumed to advocate for the input string’s membership without regards to truth, and the verifier is expected to be accurate in its decision, holding a healthy level of skepticism against the proof.

Our focus will be on the one-way IPS, which restricts the interaction to be a monologue from the prover to the verifier. Since there is no influx of information to the prover, prover’s output will be dependent on the input string only. Consequently, a one-way IPS can also be modeled as a verifier paired with a certificate function, \(c :\varSigma ^* \rightarrow \varLambda ^\infty \), where \(\varLambda \) is the communication alphabet. A formal definition follows:

The verifier’s access to the certificate is only in the forward direction. The qualifier “one-way”, however, specifies that the interaction in the IPS is a monologue from the prover to the verifier, not the aforementioned fact, which is true for all IPS.

, and where k is the minimum number of heads among the \(\textsf {2nfa}\mathrm{(}k\mathrm{)}\) recognizing L that also halts on every input. Existence of such a 2nfa(\(k\)) is guaranteed by Lemmas 2 and 4.

This work improves on the findings of [6]. For their pertinence, an outline of the algorithms attaining the errors in Eqs. (3) and (4) is provided in the following sections.

Given a language \(L \in \textsf {NL}\) with a halting 2nfa(\(k\)) recognizer M, verifier \(V_1 \in \textsf {2pfa}\) expects a certificate to report (i) the k symbols read, and (ii) the nondeterministic branch taken for each transition made by M on the course of accepting w. Such a report necessarily contains a lie, if \(w \notin \mathcal {L}\left( M\right) = L\).

Being wound up counts as a failure to reject, but does not yield a false acceptance. The resulting weak error is \(\varepsilon _{\text {strong}}= k^{-m}\), which can be made arbitrarily small.

A head of a 2nfa(\(k\)) M is said to be windable, if these three conditions hold:

The definition of a head being windable completely disregards the readings of the other heads, hence the witness path and the cycle need not be a part of a realistic execution of the machine M.

We will define the windable heads formally to clarify its distinguishing points. Some preliminary definitions will be needed.

The set \(\delta ^t(q, g_1, \dotsc , g_k)\) contains a \((k+1)\)-tuple for each nondeterministic computation to be performed by M, as it starts from the state q and reads \(g_i\) with its ith head. These tuples, each referred to as a computation log, consist of the state reached, and the movement histories of the k heads during that computation.

The constraint of a constant and persistent tape contents that is present in an execution of a 2nfa(\(k\)) is blurred in the definition for multi-step transition function. This closely resembles the verifier’s perspective of the remaining heads that it does not verify in the previous section. There, however, the verifier’s readings were consistent in itself. This slight will be accounted for with the next pair of definitions.

By Lemmas 3 and 4, given any language in NL there is a 2nfa(\(k\)) recognizing it, which also does not attempt to move its heads beyond the end markers.

(1-head consistent \(\delta ^t\)). \(\delta ^t_1 :Q \times (\varGamma ^t)^k \rightarrow \mathcal {P}\left( Q_{\setminus q_0} \times (\varDelta ^t)^k\right) \) is the ith-head consistent subset of \(\delta ^t\) of a 2nfa(\(k\)) M. It filters out the first-head inconsistent computation logs by scrutinizing the purportedly read characters by examining the movement histories against the readings. The formal definition assumes that M does not attempt to move its heads beyond the end markers, and is as follows:
Open image in new window

For each pair of transitions departing from the same tape cell, it is checked whether the same symbol is read while being performed. This check is needed to be done only for \(p \in \left( -t, t \right) \), since in \(t\) steps, a head may at most travel \(t\) cells afar, and the last cell it can read from will then be the previous one. This is also consistent with the definition of \(\rho _D\).

This last definition is the exact analogue of the verifiers’ perspective in the algorithms proposed by [6]. It can be used directly in our next definition, that will lead us to a characterization of the 2nfa(\(k\)).

When these conditions hold, \(g_1, \dotsc , g_k\) can be viewed as the sequences of characters that can be fed to \(\delta \) to bring M from \(q_0\) to q, crucially without breaking consistency among the ith head’s readings. This ensures reachability to state q. Then, the sequences \(g_1', \dotsc , g_k'\) wind the ith head into a loop; bringing M back to state q and the first head back to where it started the loop, all while keeping the ith head’s readings consistent. The readings from the other heads are allowed to be inconsistent, and their position can change with every such loop.

A head is reliable iff the head is not windable.

It is important to note that a winding is not based on a realistic execution of a 2nfa(\(k\)). A head of a 2nfa(\(k\)) M might be windable, even if it is guaranteed to halt on every input. This is because the property of being windable allows other heads to have unrealistic, inconsistent readings that may be never realized with any input string.

Consider a language \(L \in \textsf {NL}\) with a 2nfa(\(k\)) recognizer M that halts on every input. In designing the randomness-restricted 2pfa(\(1\)) verifier \(V_2\), the following three cases will be considered:

All Heads Are Reliable. In this case, \(V_1\) suffices by itself to attain reducible error. Without any windable heads in the underlying 2nfa(\(k\)), each round of \(V_1\) will terminate. The certificate can only make \(V_1\) falsely accept, and the chances for that can be reduced arbitrarily by increasing \(m\).

All Heads Are Windable. In this case, unless the worst-case assumptions are alleviated, any verification algorithm using a simulation principle similar to \(V_1\) will be wound up on the first round. The head with the minimum probability of getting chosen will be the weakest link of \(V_2\), thus the head the certificate will be lying about. The failure to reject rate is equal 1 minus that probability. This rate is the lowest when the probabilities are equal, and is then Open image in new window

For an Input String \(w \notin L\). To keep \(V_2\) from rejecting, the certificate will need to lie about at least one of the heads. Switching the head to lie about in between rounds cannot be of any benefit to the certificate on its mission, since the rounds are identical both from \(V_2\)’s and the certificate’s points of view. Hence, it is reasonable to assume that the certificate repeats itself in each round, and simplify our analysis.

Equations (5) and (6), and their consequent Theorems 1 and 2, constitute the main results of this study.

An example language with a \(k_{\text {W}}\le 1\) recognizer is the following:
Open image in new window

Lastly, it is an open question whether the following language is inside or outside rNL:
Open image in new window