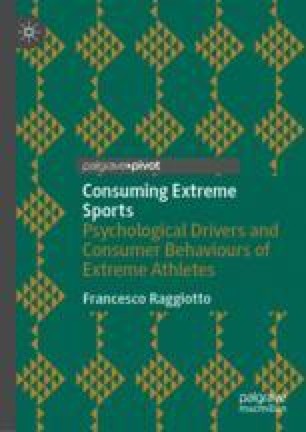 Live (and Spend?) to Tell: An Investigation of Drivers of Consumer Upgrading in Extreme Sports

This chapter develops a twin-branched model of the antecedents of upgrading the relationship with a brand for consumers participating in extreme sports. The model accounts not only for self-enhancement, perceived control, risk-taking, and self-event image congruence, but also for loyalty, satisfaction, and event image. It combines constructs that previous literature considered separately, never having related them to either upgrading or sports management. Based on 450 active participants in a major extreme sports event, the results offer a consumer-based perspective on the role of self-enhancement- and loyalty-related drivers in motiving active consumers of extreme sports to upgrade their relationship with the brand. Further insights are provided by a split model comparing consumers of different ages. An executive summary for managers and practitioners is provided at the end of this chapter.

This chapter addresses the novel importance of extreme sports consumers, providing a representation of the drivers of consumer intention to upgrade (i.e., the relationship with providers of products or services). Most existing marketing research has insisted on considering the intention to repurchase as a major positive signal in the consumer–provider relationship. However, some authors have suggested that, instead, it often is the decision to enhance the relationship (through a higher spend on merchandise, greater expenditure on equipment, more frequent purchases and so on) that signals a positive outcome of management of the relationship and that increases value for the seller (Visentin & Scarpi, 2012). Such enhancement may comprise up-selling, cross-selling and, in general, an upgrade to the relationship with the partner or brand (Visentin & Scarpi, 2012).

The model developed and tested throughout this chapter addresses consumers’ intentions to upgrade in extreme sports, combining two separate streams of literature. One branch of the proposed model addresses the traditional sports marketing drivers of upgrading that have already been discussed in industrial and relationship marketing: loyalty, trust, satisfaction and image related to extreme sports events.

Further, the model proposes that such constructs may work differently in extreme sports than in traditional sports, as extreme activities emphasize a sense of challenge, thrill, risk and self-improvement, and have been shown by psychological literature to induce different behavioral patterns. Thus, based on two leading psychological theories that examine the behavior of individuals facing extreme challenges (i.e., edgework theory and cognitive adaptation theory), a second branch based on self-enhancement is added to the model that addresses further drivers of the intention to upgrade and accounts for the unique psychology of extreme sport active participants.

Data were collected by means of a questionnaire requiring hand-written responses administered to athletes participating in a leading European championship for extreme sports. Data collection was carried out on the days in which events took place. Model estimation was carried out using structural equation modeling.

The findings of the questionnaire provide key outcomes:

In summary, findings suggest that, in extreme sports settings, traditional marketing drivers are conditioned by other drivers, accounting for the role of personal enhancement, that require considering consumers on a more personal, psychological level. In other words, drivers of consumer upgrading in extreme sports include not only marketing-related variables, but also features related to the unique psychology of extreme consumer-athletes (perceived control, attitude to risk-taking, image congruence, self-enhancement). From a practitioner’s viewpoint, it is worth noting that these drivers are not mutually exclusive; rather, they should be jointly addressed to maximize the positive outcomes of the relationship between the consumer and the service provider. Psychological drivers included in this study can be explicitly affected by organizers’ actions (e.g., emphasizing consumers’ perceived control over the event by providing detailed information about the event and about participants; adopting a more customer-based perspective in delivering the image of the event). Further insights for practice can be provided by multigroup comparisons, suggesting variables to differentiate between various target consumer groups target and how to devise appropriate strategies for each group.

Cite this chapter as:
Raggiotto F. (2020) Live (and Spend?) to Tell: An Investigation of Drivers of Consumer Upgrading in Extreme Sports. In: Consuming Extreme Sports. Palgrave Pivot, Cham