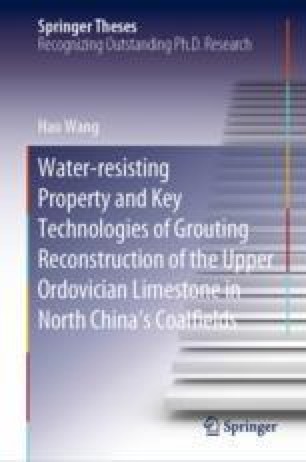 NCCs are important coalfields formed during the Permo-Carboniferous coal-forming period in China. The coalfields are distributed in a large region bounded by Yinshan Mountains in the north, Qingling Mountains in the south, Helan Mountains in the west, and seacoast in the east. They encompass Shanxi, Hebei, Shandong, Henan, Jiangsu, Anhui and Shaanxi provinces. The coal distribution area is over 1.1 million km2. This thesis includes on-site investigation in 15 mines in 6 large mining areas in NCCs such as Xingtai, Hancheng, Jincheng, and Yanzhou. Approximately 153 copies of data on different types of boreholes, 84 copies of geological and hydrogeological data, and 37 sets of technical reports were collected. The collected data concerned typical coal mines such as Dongpang and Xingdong mines in the Xingtai mining area, Caocun and Tuanbai mines in the Huoezhou mining area, Chengzhuan and Shihe mines in the Jincheng mining area, Panlong, Sangshuping, Xiangshan and Xinghuo mines in the Hancheng mining area, Baodian, Dongtan, Nantun, Xinglongzhuang mines in the Yanzhou mining area, and Dongjiahe mine in the Chenghe mining area. Tectonic movements, sedimentary environments and karst development characteristics of Ordovician limestone in NCCs were studied in this chapter.