The Bourgeois and the Savage 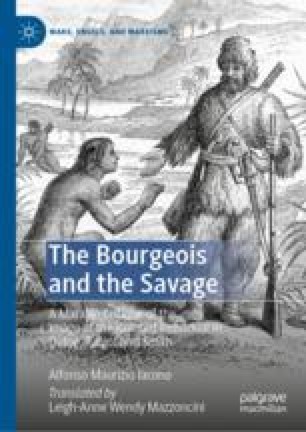 Robinson Crusoe’s Adventure on the Island: From the Isolated Economy to Political Supremacy

‘Particularly—I said aloud, though to myself—what would I have done without a rifle, without munitions, without tools with which to do anything or work, without clothes, without blankets, without curtain, without anything to shelter with?’. This is what Robinson thinks, after being able to rescue from the wreck the objects and tools that would have been necessary to survive on the island. He knows very well that without all the necessary recovered from the wreck he would have had no escape. He is perfectly aware that without a rifle, without munitions, without work tools and without clothes he would never have been able to organize his life on the island and to reconstruct the material conditions of his existence.

Cite this chapter as:
Iacono A.M. (2020) Robinson Crusoe’s Adventure on the Island: From the Isolated Economy to Political Supremacy. In: The Bourgeois and the Savage. Marx, Engels, and Marxisms. Palgrave Macmillan, Cham