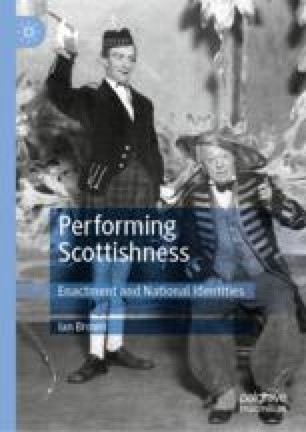 Language and Resistance in Theatre, Music Hall and Variety

This chapter recapitulates the continuity of the Scottish dramatic and theatre tradition, setting out the ways in which, since the mid-sixteenth century, with some interruptions in the seventeenth century, it has explored reflected and challenged visions of Scottishness. It pays particular attention to the ways in which Scots-language performance has been a recurring strand in that tradition, in both theatre and music hall, not least in the work of figures like Harry Lauder and Tommy Lorne who are set in their performance context. It considers how such language use has celebrated a sense of national community. It concludes by exploring the ways in which Scots-language drama has focused on socially challenging drama in the twentieth century and into the twenty-first.

Cite this chapter as:
Brown I. (2020) Language and Resistance in Theatre, Music Hall and Variety. In: Performing Scottishness. Palgrave Macmillan, Cham