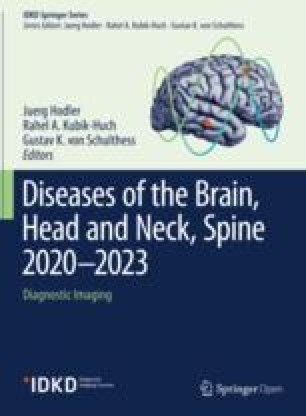 In metabolic diseases we normally differentiate between congenital and acquired diseases.

Congenital metabolic disorders in children are a vast and highly specialist field and detailed knowledge of these belongs to the remit of tertiary referral or specialty centres.

The syllabus will focus on the most common inborn errors of metabolism that can present or persist into adulthood, as well as on adult or acquired metabolic disorders.

As a number of metabolic disorders are closely related to alcohol abuse or other toxic substances, the role of toxic effects from other substances, including therapeutic and recreational drugs, will be discussed in the second part of this section. Disorders of iron accumulation (Wilson’s disease and NBIA) have been previously discussed above under movement disorders but will be also reflected in the course.

9.1 Most Common Congenital Metabolic Disorders Presenting or Persisting into Adulthood

This is a disorder of peroxisomal fatty acid beta oxidation leading to accumulation of long chain fatty acids, which can manifest itself in childhood (typically around 7 years of age) or in adult life. Adult onset cerebral ALD accounts for about 5% and usually presents with psychiatric features followed by dementia, ataxia, and seizures. As an X-linked disorder ALD is more frequent in males but around 15–20% of heterozygote females carriers become symptomatic.

The typical MRI appearance are T2 and FLAIR hyperintense white matter abnormalities staring in the parieto-occipital regions with early involvement of the splenium of the corpus callosum and corticospinal tracts. These signal abnormalities correspond to areas of demyelination. Active demyelination at the edge of the lesions is associated with contrast enhancement and restricted diffusion on DWI.

Globoid cell leukodystrophy (GLD) has been linked to a mutation in the GALC gene on chromosome 14, leading to a deficiency of galactosylceramide β-galactosidase that causes accumulation of sphingolipids in the lysosomes.

MRI shows predominantly posterior T2/FLAIR hyperintense white matter changes with sparing of the U fibres and involvement of the splenium of the corpus callosum, extending along the corticospinal tracts into the posterior limbs of the internal capsules and the pyramidal tracts.

Several variants have been described, all of which have deficient activity of arylsulfatase A, which results in defective degradation of sulfatides in the lysosomes.

MRI demonstrates symmetrical areas of T2 prolongation in the periventricular white matter with sparing of the subcortical U fibres. Early involvement of the peritrigonal white matter, corpus callosum, and cerebellar white matter is common, showing typically a “tigroid” pattern of radiating stripes. As opposed to ALD, there is no contrast enhancement of the lesion edge.

Mitochondrial encephalomyopathy with lactic acidosis and stroke-like episodes (MELAS) syndrome is a typical example of a mitochondrial disorder. About 40% of patients present in late childhood or early adulthood.

Clinical features are led by encephalomyopathy, lactic acidosis, and stroke-like episodes; other features include seizures, hearing loss, and neuropsychiatric dysfunction.

MRI demonstrates T2/FLAIR hyperintense areas involving cortical and deep grey matter, not confined to any of the major vascular territories. On diffusion-weighted imaging, ADC values can be elevated or decreased, depending on the acuity of symptoms.

Fabry disease is a lysosomal storage disease related to a deficiency of a-galactosidase. It is an X-linked inherited disorder with varied clinical presentations and an estimated prevalence of one in 50,000 persons.

The deposition of globotriaosylceramide-3 in the endothelium and smooth muscles leads to involvement of multiple organ systems, including the blood vessels, heart, and kidneys.

Macro and microvascular complications are the leading CNS manifestations, with the first cerebrovascular event usually occurring around 40 years of age.

Characteristic MRI features of Fabry’s disease are T1 hyperintensity within the pulvinar nuclei of the thalamus (the “pulvinar sign”) and ectasia of the basilar artery on MRA, which has been found to be one of the best indicators of the presence of the disease in adults.

Defects in the glial fibrillary acidic protein gene have been identified as the underlying cause of this disease, in which approximately 25% of patients present in adulthood, most commonly with bulbar dysfunction, pyramidal involvement, cerebellar ataxia, and sleep abnormalities.

In adult onset disease, MRI findings consist of atrophy and abnormal signal within the medulla and upper cord, which has been termed a “tadpole” appearance and may be accompanied by periventricular white matter change.

These are mostly seen in young adults or adults and present with typical imaging findings.

Wernicke’s encephalopathy (WE) is caused by a deficiency of vitamin B1 (thiamine), which may be due to alcohol abuse, malabsorption, poor nutrition, increased metabolism, or iatrogenic elimination (haemodialysis).

Thiamine depletion leads to failure of conversion of pyruvate to acetyl-CoA and α-ketoglutarate to succinate and the lack of Krebs cycle resulting in cerebral lactic acidosis with intra- and extracellular oedema, swelling of astrocytes, oligodendrocytes, myelin fibres, and neuronal dendrites.

The classic clinical triad of ocular dysfunctions (nystagmus, conjugate gaze palsy, ophthalmoplegia), ataxia, and confusion is observed only in 30% of cases. Treatment consists of thiamine infusion, which can prevent progression to Korsakoff’s dementia or death.

Contrast enhancement occurs in 80% in the mammillary bodies (often prior to T2 hyperintensities) and in 50% in the peri-acqueductal regions.

Imaging abnormalities can regress with treatment, but the prognosis is usually poor once there is cortical involvement or T1 hyperintensity in the thalami and mammillary bodies indicating haemorrhagic change.

This is a disorder of the spinal cord secondary to vitamin B12 deficiency, characterised by gliosis and spongiform degeneration of the posterior and lateral columns. Clinical presentations are in spastic paraparesis and spinal ataxia.

MRI demonstrates T2 hyperintensities in the posterior and lateral columns of the spinal cord, which can reverse after adequate B12 administration. Chronic non- or undertreated cases show spinal cord atrophy.

The traditionally proposed pathophysiological mechanism is a disruption of the blood–brain–barrier resulting in vasogenic oedema, fibre tract compression, and myelinolysis. Additional implicated mechanisms are cerebral dehydration, intramyelinic oedema, and oligodendrocyte degeneration. The most common damage is in the central pontine fibres (CPM). Extrapontine demyelination (in sites such as basal ganglia, thalami, lateral geniculate body, cerebellum and cerebral cortex) may occur together with CPM or in isolation (in approximately 10%).

Typical MRI features of central pontine myelinolysis are T2/FLAIR hyperintensity in the central pons showing a symmetric “trident” or “bat-wing”-pattern, due to sparing of the peripheral fibres and the axons of the corticospinal tracts.

In the acute phase DWI shows restricted diffusion with a decreased ADC. This may occur within 24 h of symptom onset and precede the signal abnormalities seen on T2 or FLAIR images. The ADC values usually return to baseline within 3–4 weeks.

CPM can appear moderately hypointense in T1 and may infrequently show contrast enhancement. If the patient survives the acute phase, the pontine lesions can cavitate and appear markedly hypointense on T1 weighted images.

The term hepatic encephalopathy includes a spectrum of neuropsychiatric abnormalities in patients with liver dysfunction. Most cases are associated with cirrhosis and portal hypertension or portal-systemic shunts, but the condition can also occur in acute liver failure.

Classical MR abnormalities in chronic hepatic encephalopathy include high signal intensity in the globus pallidus on T1-weighted images, and less frequently, in the substantia nigra and the tegmentum of the midbrain, secondary to increased concentrations of manganese (Fig. 9.2) [2].

Magnetisation transfer imaging, fast FLAIR, and DWI sequences may demonstrate white matter abnormalities secondary to increased CNS ammonia concentration. These return to normal with restoration of liver function, and are thought to reflect mild diffuse interstitial brain oedema, which appears to play an essential role in the pathogenesis of hepatic encephalopathy.

In acute hepatic encephalopathy, bilateral symmetric T2-hyperintensities of the cortical grey matter are often associated with restricted diffusion. There may be additional involvement of the subcortical white matter, basal ganglia, thalami, and midbrain. These imaging abnormalities are thought to reflect cytotoxic oedema secondary to acute hyperammonemia.

An acute decrease in serum glucose levels can arise from an excess of exogenous or endogenous insulin and hypoglycaemia inducing drugs. This causes a decline of the cell membrane ATPase pump activity and release of excitatory neurotransmitters such as aspartate.

MRI is more sensitive and shows T2 hyperintensities as well as restricted diffusion in the posterior limb of the internal capsules, hippocampi, the basal ganglia and cortical areas and splenium of the corpus callosum. These changes are likely to reflect cytotoxic oedema and extensive DWI changes in the basal ganglia and deep white matter are associated with poor clinical outcome.

Hyperglycaemia occurs in uncontrolled diabetes mellitus and can lead to osmotic derangements the basal ganglia and subthalamic region.

Imaging findings are hyperdense changes on CT and T1 hyperintensities on MRI within the putamen and caudate nuclei, which may be uni- or bilateral. SPECT has been reported to show hypoperfusion in the basal ganglia. After correction of blood glucose, the imaging abnormalities usually regress [3].