Sartre and the International Impact of Existentialism 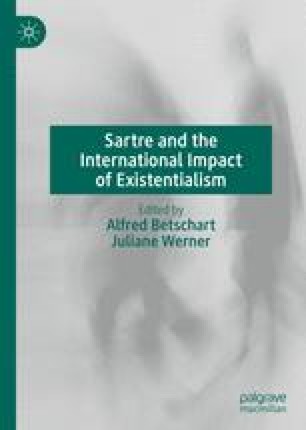 Sartre’s Presence in Israeli Literature: The Case of Hanoch Levin

Jean-Paul Sartre’s introduction in Israeli literature has to be placed in its precise context. Let us remember that the Israeli literature of the first years of the state was heroic. The new state had to use all its energies to survive, facing at the same time the dangers of war—the War of Independence had ended in 1949—and the challenges of domestic policies, such as the integration of a very large wave of immigration from Arab countries. In such a situation, literature could only be a text accompanying the Zionist epos on its way. The writers and poets of the 1950s, like Natan Alterman, S. Yizhar, and Haim Gouri, are known for their novels and poems on the War of Independence and the sacrifices it required. We can thus describe this age as the heroic age of Hebrew literature: the hero of the young Israeli literature was usually a soldier or someone whose place within society was well defined. Those were the most ideological years of the state, a state whose model was the Soviet Union. Israel was a country entirely mobilized for its struggle to survive.

Cite this chapter as:
Klein R. (2020) Sartre’s Presence in Israeli Literature: The Case of Hanoch Levin. In: Betschart A., Werner J. (eds) Sartre and the International Impact of Existentialism. Palgrave Macmillan, Cham