The Church on British Television 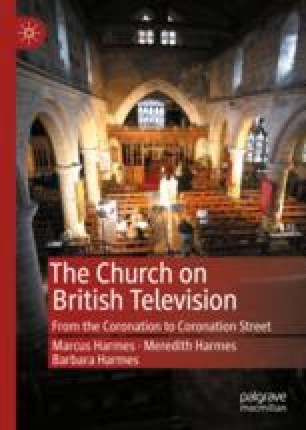 The Church on British Television pp 65-76 | Cite as

While broader histories of

television have largely overlooked the input and impact of the Church on the expanding television service, this chapter surveys the significance and even the prophetic involvement of the clergy, including on the universal spread of the television set into homes and the contribution of clergy to debates at key moments in the development of television. Including the Beveridge Committee and then the Pilkington Committee, clergy mobilised and organised with the Church’s own Television Council, through organs including the House of Lords, the British Council of Churches (BCC) and the Central Religious Advisory Committee (CRAC), the latter two both ecumenical but dominated by Anglicans. This chapter shows how members of the Church forcefully interacted with stakeholders from the postmaster general downwards, shaping the limits and definitions of what was recognised as appropriate religious content especially for a commercial channel and learning more about the technology itself, with an increase in technological literacy.