Cinema and the Algerian War of Independence 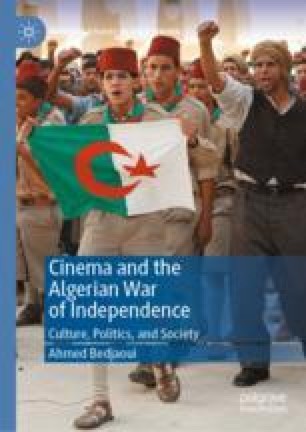 Algeria-France: A Long War of Images

The first battle: Orientalists on board

The second stage saw the beginnings, with photography, of more sophisticated means of communication and representation of the world. Human types were photographed and classified. They were shown in school books. After the Orientalists’ lascivious images of natives under the sun, Algerians had to suffer the exotic gaze of photographers.

In the fringes of the UN: Jean-Jacques Servan-Schreiber and Jean Daniel were to play a part in the interest that Senator Kennedy took in the Algerian resistance, an interesting role and a complementary one to that of the leaders and representatives of the FLN.

American reporters in the maquis Jean Daniel was very close to Joseph Kraft, a journalist with the Washington Post and the New York Times, before becoming one of John Kennedy’s speechwriters during the presidential campaign in 1960. In the autumn of 1957, this same Joe Kraft came to visit the maquis of Wilaya V, on behalf of the Saturday Evening Post. He was accompanied by Khaled Khelladi, known as Si Tahar. This visit is confirmed in No. 19 of El Moudjahid, dated February 28, 1958: ‘Joe Kraft, special envoy of the famous magazine Saturday Evening Post has spent some time staying with the maquis in Wilaya V.’

Kennedy’s Algeria speech: Robert Miller describes how the Democrat Senator from Massachusetts, wanting to expand his legitimacy in foreign policy, denounced the position of the American government regarding the aspirations of the Algerian nationalists, which he deemed legitimate.

Cite this chapter as:
Bedjaoui A. (2020) Algeria-France: A Long War of Images. In: Cinema and the Algerian War of Independence. Palgrave Studies in Arab Cinema. Palgrave Macmillan, Cham