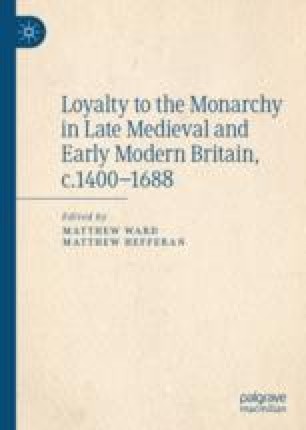 ‘I claim no right but would this land defend’: Loyalty to the Institution of Kingship in Blind Hary’s The Wallace

Rather than seeing The Wallace as a subversive text written in support of those dissatisfied with James III’s rule, this chapter will suggest that the poem might be best understood as a conservative work intended to encourage the Scottish political community to cling to those values for which the king was supposed to stand, even when the king failed to embody those values himself. The chapter begins by offering some background on how historians have tended to date the poem and addressing some of the problems surrounding both the dating of the text and the precise identity of the author. Efforts will also be made to reconstruct Hary’s intended audience through a close analysis of the individuals and families named in the text of his poem. There is a striking correlation between the names of lairds and knights recorded in The Wallace and politically active members of the lower nobility in late fifteenth-century Scotland. Individuals from within this cohort who are known to have had grievances with James III or to have played a role in the crises of the 1480s seem to have been a key part of Hary’s likely audience. The chapter will consider the interpretations of those scholars who have argued that The Wallace contains a rich vein of anti-royal feeling and may even be read as a piece of propaganda directed against James III’s increasingly pro-English foreign policy and possibly even in favour of his replacement by his younger brother, the duke of Albany. Since these arguments have tended to focus on the relationship between Wallace and Bruce in Hary’s poem, the chapter will also analyse this relationship and argue that while the two characters occupy contradictory positions for most of the poem, Wallace does not seek to supplant Bruce but rather provides an example of how Bruce himself should behave. It will be argued that Wallace’s actions in defence of the kingdom demonstrate an awareness on Hary’s part of a distinction between the person of the king and the institution of the crown itself. That a more general awareness of this distinction existed in late medieval Scotland will be demonstrated with reference to the various guardianships, lieutenancies and minorities of the fourteenth and fifteenth centuries, from which emerges the idea of the office of the Scottish crown focused particularly on the defence of the realm. Hary highlights this distinction in his presentation of Wallace’s guardianship, using the conflict between Wallace and Bruce to encourage his readers to uphold the values associated with the office of the crown and thereby ‘redeem’ a king who was not living up to those values.

Cite this chapter as:
Watson C. (2020) ‘I claim no right but would this land defend’: Loyalty to the Institution of Kingship in Blind Hary’s The Wallace. In: Ward M., Hefferan M. (eds) Loyalty to the Monarchy in Late Medieval and Early Modern Britain, c.1400-1688. Palgrave Macmillan, Cham