Climate Impacts on Agricultural and Natural Resource Sustainability in Africa 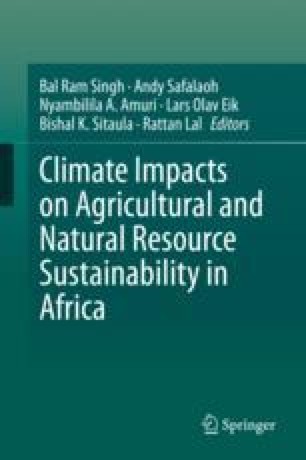 In Search of Climate-Smart Feeds: The Potential of Pearl Millet (Pennisetum glaucum, L.) to Replace Maize as an Energy Feed Ingredient in Broiler Diets in Malawi

Feed is an important element in poultry production. To ensure sustainability, there is a need to explore nontraditional climate-resilient feed ingredients in poultry diets. This is necessary because of the increasing demand for key ingredients such as maize which is also a staple food crop and due to low supplies attributed to several factors including climate change effects. A study was conducted to evaluate the effects of replacing maize with varying inclusion levels of pearl millet on growth performance of broilers, carcass weight, and cost-effectiveness. A total of 260-day-old chicks were allocated to four treatments comprising pearl millet inclusion levels of 0%, 10%, 20%, and 100% in isocaloric and iso-nitrogenous starter and finisher diets. Each treatment had five replicates of 13 broilers each, in a completely randomized design (CRD), for 56 days. Data on feed intake and body weights were collected at weekly intervals. At the end of the experiment, five broilers from each treatment were randomly selected and evaluated for carcass weights and digestibility of diets, respectively. The results showed that there were no significant differences (P < 0.05) in mean final body weights, overall weight gain, carcass weight, and digestibility in all the treatment diets except for feed conversion ratio. The highest gross margin was obtained from the 0% pearl millet inclusion level, followed by 10% and 20% pearl millet inclusion levels. Use of pearl millet as the sole energy feed ingredient gave negative returns. It is concluded that replacing maize with pearl millet from 10% to 20% inclusion level as percent of the diet has no detrimental effect on broiler growth performance. The implication of these findings is that millet, which is more drought tolerant than maize, can potentially reduce the sole dependency on maize as an energy - feed source in poultry diets. Use of pearl millet can therefore contribute to adaptive capacity of broiler producers and feed compounders during droughts when maize supply is low.

This study was supported through the “Towards ‘Feed’ Security and Climate Smart Feed Ingredients: Assessment of sorghum and millet as replacement for maize in poultry diets” Project with funding from the Directorate of Research and Outreach at Lilongwe University of Agriculture and Natural Resources (LUANAR) for which we are very grateful. The support of Ms. Thokozani Holla in data collection is also gratefully acknowledged.

Cite this chapter as:
Safalaoh A.C.L., Kavala E. (2020) In Search of Climate-Smart Feeds: The Potential of Pearl Millet (Pennisetum glaucum, L.) to Replace Maize as an Energy Feed Ingredient in Broiler Diets in Malawi. In: Singh B., Safalaoh A., Amuri N., Eik L., Sitaula B., Lal R. (eds) Climate Impacts on Agricultural and Natural Resource Sustainability in Africa. Springer, Cham