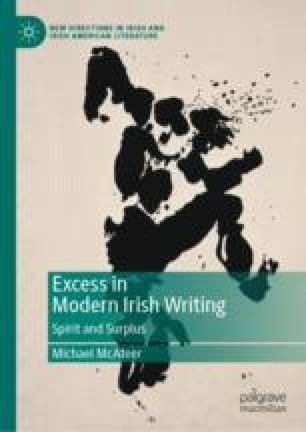 In this chapter, Michael McAteer analyses the mystical aspect of excess in terms of sacrifice as it is presented in three Irish plays: Patrick Pearse’s The Master, W. B. Yeats’s Purgatory and Marina Carr’s By the Bog of Cats… He provides a ground-breaking interpretation of excess in Pearse’s play in terms of Kierkegaard’s thought on sacrifice. Taking account of readings of sacrifice by Bataille and Žižek, McAteer considers how sacrificial killing in Yeats’s play exemplifies Heidegger’s special understanding of guilt in Being and Time. This chapter concludes with a consideration of sacrifice in Marina Carr’s 1998 play, By the Bog of Cats… in light of Pearse’s and Yeats’s plays from the early twentieth century.