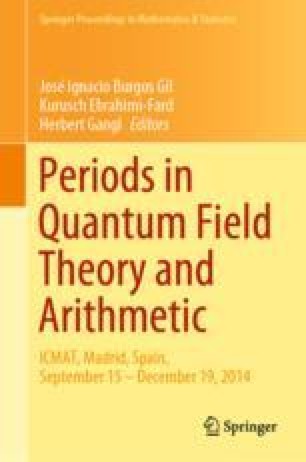 Feynman amplitudes are being expressed in terms of a well structured family of special functions and a denumerable set of numbers—periods, studied by algebraic geometers and number theorists. The periods appear as residues of the poles of regularized primitively divergent multidimensional integrals. In low orders of perturbation theory (up to six loops in the massless \(\varphi ^4\) theory) the family of hyperlogarithms and multiple zeta values (MZVs) serves the job. The (formal) hyperlogarithms form a double shuffle differential graded Hopf algebra. Its subalgebra of single valued multiple polylogarithms describes a large class of euclidean Feynman amplitudes. As the grading of the double shuffle algebra of MZVs is only conjectural, mathematicians are introducing an abstract graded Hopf algebra of motivic zeta values whose weight spaces have dimensions majorizing (hopefully equal to) the dimensions of the corresponding spaces of real MZVs. The present expository notes provide an updated version of 2014’s lectures on this subject presented by the author to a mixed audience of mathematicians and theoretical physicists in Sofia and in Madrid.

Dedicated to the memory of Raymond Stora, mentor and friend.

It is a pleasure to thank Francis Brown and Herbert Gangl for enlightening discussions at different stages of this work and Kurusch Ebrahimi-Fard for his invitation to the 2014 ICMAT Research Trimester. I thank IHES for its hospitality during the completion of these notes (January, 2016). The author’s work has been supported in part by Grant DFNI T02/6 of the Bulgarian National Science Foundation.

Just as Archimedes (287–212) dominated the mathematics of the 3d century BC so, 2000 years later, Euler is dominating the mathematics of 18th century. Born in the family of the Protestant minister of the parish church in Riehen, a suburb of the free (Swiss) city of Basel (see [45] where pictures of the church and of the parish residence are reproduced), he entered the University of Basel at the age of 13 to study theology. His mathematics professor, Leibniz’s student Johann Bernoulli (1667–1748—who had inherited the Basel chair of his brother Jacob, 1654–1705), offered to give private consultations at his home to the diligent boy on Saturday afternoons. At the age of twenty Euler accepted a call to the Academy of Sciences of St. Petersburg (founded a few years earlier by the czar Peter I, the Great) where two of Johann’s sons, Daniel and Niklaus Bernoulli, were already active. Contrary to most other foreign members he mastered quickly the Russian language, both in writing and speaking. It is during this very active first St. Petersburg period that Euler first became interested (around 1729—along with major work on mechanics, music theory, and naval architecture) in the “Basel problem”—the problem of finding what we would now call (after Riemann) \(\zeta (2) (=\sum _1^\infty 1/n^2)\). (It is actually a problem which a young professor in Bologna, Pietro Mengoli, successor of the great Cavalieri, posed in 1644/1650 [4] and which excited the brothers-rivals Jacob and Johann Bernoulli in Basel.) Euler started by devising efficient approximation for calculating the (slowly convergent) series for \(\zeta (2)\). As Weil [79] puts it “as with most of the questions that ever attracted his attention, he never abandoned it, soon making a number of fundamental contributions ...”. In 1731 the 24-year-old Euler introduced the “Euler-Mascheroni constant” (see [54]):
$$\begin{aligned} \gamma = \lim _{n\rightarrow \infty } (\sum _{k=1}^n \frac{1}{k} - \ln n) = \sum _{n=2}^\infty (-1)^n \frac{\zeta (n)}{n} (=0.5772...)\ . \end{aligned}$$
(83)
He then discovered the so-called Euler-MacLaurin formula and introduced for the first time the Bernoulli numbers into the subject [79]. Next came, in 1735, his sensational discovery of the formula \(\zeta (2)= \frac{\pi ^2}{6}\), based on a bold application of the theory of algebraic equations to the transcendental equation \(1-\sin x =0\). This was soon followed by the calculation of \(\zeta (m)\) for \(m=4, 6\), etc. In the same period Euler calculated \(\zeta (3)\) up to ten significant digits and convinced himself that it is not a rational multiple of \(\pi ^3\) (with a small denominator) and found on the way the identity \(\zeta (1, 2)=\zeta (3)\) [35]. Peeling off consecutive prime factors from \(\zeta (s)\), starting with two (see [45]),
$$\begin{aligned} (1-2^{-s})\zeta (s) = 1 + 3^{-s} + 5^{-s} + ...\,, \nonumber \end{aligned}$$
Euler discovered in 1737 the fabulous product formula,
$$\begin{aligned} \prod _p (1-p^{-s}) \zeta (s) = 1\ . \end{aligned}$$
(84)
It was during the subsequent Berlin period (1741-1766), invited by Frederick II, that Euler conjectured, in 1749, the functional equation for the zeta function that became, 110 years later, the basis of Riemann’s great 1859 paper, [79]. Euler’s work on number theory was done, as Fermat’s a century earlier, against a background of contempt towards the field by the majority of mathematicians. He was not deterred. As he once observed “one may see how closely and wonderfully infinitesimal analysis is related not only to ordinary analysis but even to the theory of numbers, however repugnant the latter may seem to that higher kind of calculus” (see [78] Chapter III Sect. V). Euler’s “defense of Christianity” of 1747, as Weil ([78] Chapter III, Sect. II) puts it, “did nothing to ingratiate its author with the would be philosopher-king Frederick.” Disgusted by the superficial (but fashionable at the court of Frederick) anticlerical Voltaire, Euler took the opportunity offered to him by Empress Catherine II (the Great) to return to St. Petersburg where he spent the last (most productive!) period of his life (1766–1783).

The study of polylogarithms has started with the dilogarithm function. Its integral representation (that serves as an analytic continuation of the series)
$$\begin{aligned} Li_2(z)\ (=\sum _{n=1}^\infty \frac{z^n}{n^2}) = -\int _0^z \frac{\ln (1-t)}{t}dt \end{aligned}$$
(85)
first appears in 1696 in a letter of Leibniz (1646–1716) to Johann Bernoulli. As already noted, Euler started playing with the corresponding series around 1729. According to Maximon [59] (who is taking care to establish the priority of British mathematicians) the first study of the properties of the integral (85) for complex z belongs to John Landen (1719–1790) whose memoir appears in the Phil. Trans. R. Soc. Lond. in 1760, albeit most authors credit for this Euler (who wrote on the subject later, in 1768). The first comprehensive study of the dilog was given in the book of Spence of 1809 (see [3, 59]) whose results are usually attributed to later work of Abel. The name Euler dilogarithm was only introduced by Hill (1828). The two-variable, five-term relation
$$\begin{aligned}&Li_2(x)+Li_2(y)+Li_2(\frac{1-x}{1-xy})+Li_2(1-xy) + Li_2(\frac{1-y}{1-xy})= \, \nonumber \\&\frac{\pi ^2}{6} -\ln x \ln (1-x) - \ln y \ln (1-y) +\ln (\frac{1-x}{1-xy})\ln (\frac{1-y}{1-xy}) \end{aligned}$$
(86)
was discovered and rediscovered by Spence (1809), Abel (1827), Hill (1828), Kummer (1840), Schaeffer (1846) (see [81]). The oriented (odd under permutations of the vertices) volume of the ideal tetrahedron in hyperbolic space is expressed in terms of the Bloch-Wigner function (73): \(\tilde{D}(z_1, ..., z_4):=D(\frac{z_{12}z_{34}}{z_{13}z_{24}})\). It has been found by Lobachevsky in 1836 (for a review see [60]). An early (1955) reference, in which Clausen’s (1832) dilogarithm appears in a fourth order calculation in QFT, is [52]. Two years later A. Petermann and (independently) C.A. Sommerfield uncovered \(\zeta (3)\) in a calculation of the electron magnetic moment (see the lively review in [72] where important later work by Laporta and Remiddi [56] is also surveyed—see also [74]). It reappeared in another calculation in perturbative quantum electrodynamics in the mid 1960’s [66]. The modern notations and a survey of dilogarithmic identities and their polylogarithmic generalizations are given by an electrical engineer [58] (for a nice informative review of his book—see [3]). The harmonic polylogarithms (with singularities at the three roots of the equation \(x^3=x\)) are surveyed in [65]. David Broadhurst was a pioneer in the systematic study of MZV in QFT (see [15] and references to earlier work cited there as well as his popular talk [13] in which he shares his enthusiasm with beautiful numbers—like \(\zeta (3)\)—appearing in various branches of physics). The saga of the anomalous electron magnetic moment (\(g-2\)) calculation continues to this day (for a review of a leading author in the field—see [53]; a later four-loop analytic calculation is reported in [55]). The resurgence of polylogarithms in pure mathematics, anticipated by 19th century work of Kummer and Poincaré and a 20 century contribution by Lappo-Danilevsky, was prepared by the work of Chen [19, 33] on iterated path integrals. The coproduct of hyperlogarithms was written down by Goncharov [47] as a planar decorated version of Connes-Kreimer’s Hopf algebra of rooted trees [34]. One of a number of recent conferences dedicated to this topic had the telling title Polylogarithms as a Bridge between Number Theory and Particle Physics (see the notes [82] which contain a historical survey with a bibliography of some 394 entries). Recent developments and perspectives are surveyed in Francis Brown’s lecture [23] at the 2014 International Congress of Mathematicians and [26] as well as in the lectures ([6, 32]) in these proceedings.