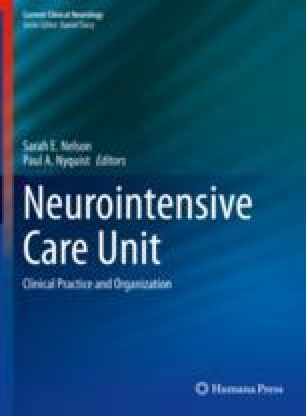 Ultrasound has revolutionized the practice of medicine and critical care. The use of bedside ultrasound and transcranial Doppler has multiple important applications in decision-making in neurocritical care, some of which are still being discovered. The basic principles, however, must be well-understood; in addition, sound operator training is needed. Optimal use of these modalities requires understanding dynamic changes in systemic and cerebrovascular blood flow physiology and interpreting them in the context of the patient’s clinical condition and ongoing therapies. This chapter provides a broad framework for novices and also addresses the latest research pertaining to critical care ultrasound in subarachnoid hemorrhage, traumatic brain injury, ischemic stroke, intracranial hemorrhage, brain death, and bedside procedures. Original clinical cases with illustrations and images are used to highlight key concepts.

Clinical Case 1: A 59-year-old man presents with the worst headache of his life and is diagnosed with Hunt and Hess grade 3 and modified Fisher grade 3 SAH due to a ruptured left MCA bifurcation aneurysm. On day 8, TCD reveals elevated left MCA MFV (mean 156 cm/s) and an LR of 5.7 consistent with moderate vasospasm. Velocities continue to increase, prompting an angiogram on day 12 that reveals mild to moderate vasospasm that is treated with intra-arterial verapamil. Velocities reach a plateau and gradually decrease thereafter. See Fig. 25.1 for key features of the spectral waveform including peak systolic velocity (PSV) and end-diastolic velocity (EDV); all other indices are calculated from these velocities.

Clinical Case 2: Volume assessment using bedside ultrasound in a patient with aneurysmal SAH. (a) A highly collapsible IVC with an absolute diameter <1 cm suggested fluid responsiveness. The IVC diameter increased and collapsibility was reduced following a bolus of IV fluids (not shown). All measurements are performed just distal to the entry point of the hepatic vein into the IVC. (b) Development of multiple B-lines after further resuscitation suggested fluid overload. Fluids were stopped to prevent the development of respiratory distress.

Clinical Case 3: A 76-year-old woman presented with severe traumatic SAH after falling down a flight of stairs. A CT head revealed diffuse subarachnoid and subdural hemorrhage. She was hypotensive on presentation and required vasopressors. The initial EKG revealed ST segment elevations in septal leads and a mild troponin elevation. Bedside TTE (apical four chamber view) in systole showed apical akinesis consistent with a diagnosis of Takotsubo cardiomyopathy. No segmental wall motion abnormalities were present to suggest myocardial ischemia. Her hypotension improved with supportive care and she was weaned off vasopressors by day 3. A follow-up TTE (not shown) showed resolution of the apical akinesis.

Clinical Case 4: A 50-year-old man was found down with a Glasgow Coma Scale of 5 and diffuse multi-compartment hemorrhage on CT head consistent with severe traumatic brain injury. ICPs >30 cm H2O (corresponds to ~22.1 mm Hg) were noted on external ventricular drain insertion. The ONSD was 0.70 cm (upper limit normal 0.50 cm). At the time of ONSD measurement, the ICP was 23 mm Hg. There was also a poor ICP waveform with a prominent P2 wave consistent with decreased intracranial compliance. An axial image of the globe is shown with the lens anterior (top of the image) and the optic nerve posterior (bottom of the image).

Clinical Case 5: A 76-year-old woman with fibromuscular dysplasia had a routine carotid ultrasound that revealed severe (>70%) stenosis of the left ICA. The stenosis was manifested by elevated left mid-ICA flow velocities (PSV 267.5 cm/s, EDV 76.8 cm/s) and a poststenotic turbulent flow pattern in the distal ICA. The ICA to CCA ratio was 4.4. Heterogeneous plaque was seen in the same location. She was referred for and underwent successful carotid revascularization.

Clinical Case 6: A 32-year-old woman was admitted with severe headache, nausea, and vomiting. She was found to have extensive cerebral VST involving the superior sagittal and transverse venous sinuses on CTV. TCDs were performed. Insonation through the posterior temporal window demonstrated an arterial waveform from the right P1 segment of the PCA (early in the tracing and above baseline; the PCA [especially the P2 segment of the PCA] serves as a useful landmark for the deep venous system since they both tend to be adjacent to each other), followed by a venous monophasic waveform (the basal vein of Rosenthal, seen below baseline) that represents flow away from the probe. The tracing reveals elevated venous velocities (~40 cm/s). The patient was immediately started on a heparin drip, her symptoms resolved, and she was later transferred to a floor bed in stable condition.

Clinical Case 7: A 78-year-old woman presented with sudden onset headache. A non-contrast head CT revealed right frontoparietal ICH. Her neurologic exam was concerning for elevated ICP and impending uncal herniation (ipsilateral “blown pupil”) but invasive monitoring was not possible. (a) B-mode ultrasound shows left ONSD measured 3 mm behind the optic disc. The lens is visualized in the same axis. Prior to IV mannitol administration, ONSD was 0.69 cm (not shown). Thirty minutes after mannitol it was 0.63 cm. (b) Calculation of MLS using Eq. 25.4 (see text). Ultrasound image via the left temporal window shows a “double reflex” (i.e., third ventricle) measuring 6.14 cm from the contralateral (left) temporal window (distance B); note the hypoechoic thalami surrounding the third ventricle. The third ventricle from the ipsilateral temporal window measured 8.54 cm (or distance A, image not shown). Using Eq. 25.4, MLS is 1.15 cm, which correlated closely to the MLS determined from CT head (see [d]). (c) The pineal gland, another midline marker, is demonstrated as a hyperechoic structure dorsal to the thalami/3rd ventricle and measures 8.49 cm from the ipsilateral temporal window. Of note this is quite similar to the position of 3rd ventricle measured ipsilaterally which was at 8.54 cm (not shown). (d) A CT head obtained within 12 hours of the ultrasound in this patient shows MLS of 1.2 cm at the septum, similar to the estimated MLS using ultrasound (see [b]).

Clinical Case 8: Right internal jugular vein (IJ) central venous catheter placement in short axis view. Following the needle point is key to correct placement. The needle shaft can masquerade as the needle point such as in this case. Tenting of the anterior wall of the vein is another clue to the actual position of the needle point.