Ethics of Medical Innovation, Experimentation, and Enhancement in Military and Humanitarian Contexts 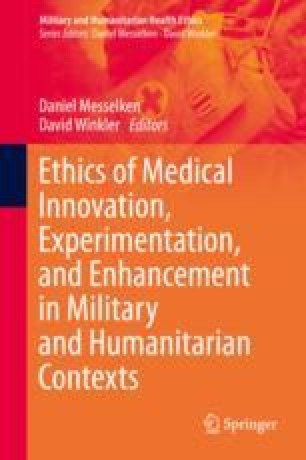 Ethics of Medical Innovation, Experimentation, and Enhancement in Military and Humanitarian Contexts pp 261-268 | Cite as

Supersoldiers and Superagers? Modernity Versus Tradition

In the modern Western world, there are two situations in which people face a more than usual risk of death – in old age and if fighting in a war. In the former case they may wish to be ‘superagers’, with death delayed as long as possible through fitness regimes and therapy. In the latter it has been proposed that they be medically enhanced to become ‘supersoldiers’. Both aspirations should be understood against the background of Western fears of death, manifested in the taking of broadly technological steps to delay or to avoid it. This is an aspect of the modern Western world view, whose basic value is individual autonomy, with a consequent desire for control and a conceptualization of what threatens it as risk. A good life is viewed as one in which the individual succeeds in achieving the life he or she has chosen. The risk of death is of an ultimate loss of control, to be averted by all means consistent with the rights of others to autonomy too, so that, prima facie, both superagers and supersoldiers should be welcomed. This world view contrasts with a traditional one which regards people as fundamentally holders of roles and of their lives as good to the extent to which they carry out their roles conscientiously and effectively. Death is to be feared only as interfering with this outcome. The role of soldier is a hazardous one, but how it is to be performed is governed by rules transmitted through tradition. It therefore seems that it is up to soldiers versed in this tradition to determine whether they would be willing to become or to confront supersoldiers. It is questionable whether the mental state of supersoldiers is consistent with the traditional self-conception that soldiers share. Nor does it seem to allow for the virtues that can make soldiering a good life. The traditional view of the soldier’s role is that of orthodox just war theory. So-called revisionism, by contrast, depends on a modern Western view of rights and may make supersoldiers more attractive. But soldiers may resist this development.