The Koopman Operator in Systems and Control 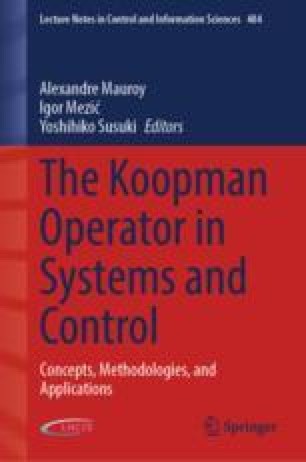 Data-driven analysis of dynamic performance has attracted a lot of interest in the modern power grid with highly accurate measurement technologies such as Synchrophasor. In this chapter, we report the research effort to do this for voltage dynamics in a rudimentary model of power grids. We use the combination of the so-called delay embedding with the extended dynamic mode decomposition, which is a technique for approximating the Koopman operator directly from time-series data. This combination enables us to approximate the spectral properties of the Koopman operator through voltage–amplitude measurement of a single bus. The spectral properties clarify not only the local information on the voltage dynamics such as frequency/damping in transient responses but also global one such as the flow structure of the underlying mathematical model.

The authors greatly appreciate Professor Takashi Hikihara (Kyoto University) for valuable discussion on this work and Professor Igor Mezić (University of California, Santa Barbara) for his careful reading of the draft of this chapter with valuable comments, which are cited in the remark of the appendix. During part of the work on this chapter, the authors were at Laboratory of Advanced Electrical Systems Theory, Department of Electrical Engineering, Kyoto University, Kyoto, Japan. The work is supported in part by JST-CREST program #JP-MJCR15K3 and JSPS-KAKEN #15H03964.

First of all, we introduce the definition of unitary equivalence of two bounded linear operators prior to the main theorem.

An important fact is that the spectra of unitarily-equivalent operators have identical structures: either both are point spectra, continuous, or mixed. In particular, in the case of pure point spectrum, the eigenvalues of unitarily equivalent operators are identical and the multiplicities of corresponding eigenvalues are the same. An intuitive example of the unitary operator accomplishing the unitary equivalence is the Fourier transform. The notion of unitary equivalence is important in traditional ergodic theory to characterize properties of measure-preserving dynamical systems, called spectral invariants [2].

The theorem is proved for the case of measure-preserving dynamical systems for which the associated Koopman operators are unitary. As mentioned in the last paragraph of the conclusion, its generalization is expected to be a large class of dissipative dynamical systems. It is shown in [17] that the so-called ergodic partition of a state space, which is based on eigenspace of eigenvalue 1 of the associated Koopman operator, can be inferred from the delay embedding. It is also shown in [23] that the eigenspace of eigenvalue 1, which is computable via time average of a continuous observable, is direct to characterizing the basin of attraction in dissipative systems. These suggest that a sort of spectral equivalence of Koopman operators will hold generally.