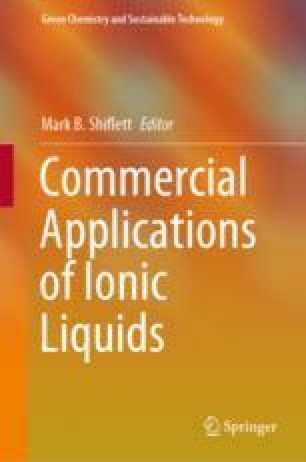 By 2019, a large number of different ionic liquids (ILs) had been synthesized. There is a large uncertainty about the correct number, but there must be at least a couple thousand different ones described in the scientific literature and a similar number in labs of chemical companies. To synthesize ionic liquids, numerous organic and inorganic compounds can be used and combined. A major goal of chemists who are designing novel ionic liquids is to predict ionic compounds that may be liquid at room temperature (or are at least liquid below a melting point of 100 °C, which is the common definition for ILs). A lot of experience is necessary to avoid the synthesis of too many substances that do not have sufficient properties. It is also possible to use efficient physico-chemical tools to design ionic liquids, such as the “molecular volume approach” released by Krossing et al. in 2007 [1]. Using this method, it was possible to predict fundamental data, such as melting points, viscosities, conductivities, and densities, which matched very well with experimental data. As a consequence, over the past two decades ionic liquids became indeed “designer solvents” but also “designer electrolytes” and “designer (functional) materials.” Powerful tools combined with experience made it possible after more than 20 years of intensive research in many fields for ionic liquids to become industrially important products. As a consequence, the importance of methods for the commercial production became more and more relevant. This overview for understandable reasons cannot be complete because the producers of ionic liquids are surely using numerous lab secrets and non-published information for their processes. Thus, in this chapter, the most prominently known production methods are summarized.