Mathematics Education in the Early Years 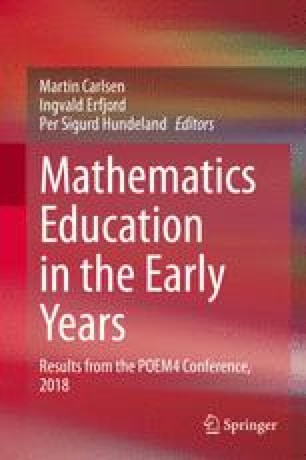 Mathematics Education in the Early Years pp 421-439 | Cite as

“Pedagogical” Mathematics During Play at Home: An Exploratory Study

This chapter provides an exploratory analysis of two play-based at-home activities for evidence of two mothers’ capacity to establish, and sustain mathematics as a goal, while addressing each child’s role throughout the event. The pedagogical tasks, Playdoh pizza and Toy cars, shed light on ways in which parent–child activity may unfold in families and underscore a need to learn more from parents about the pedagogical practices that make sense to them.

As the RA video records, Adam’s mother and her preschool daughter are seated at adjacent sides of the child’s table. With her mother’s help, the daughter empties a “lump” of Play-Doh onto the table and begins to roll it flat with a wooden rolling pin. At times the mother helps flatten the dough to make it easier for the roller and converses with her daughter as the child concentrates on rolling out the pizza. Early in the conversation, when the mother asks what shape she is trying to make, the daughter suggests “a heart”; when the mother asks, “what’s the shape of a Pizza?” She’s heard qualifying her daughter’s response of “triangle” with “when it’s sliced”; she then encourages her child to make a “big circle” like regular pizzas. As the child continues to roll the Play-Doh into a circle, the mother turns their attention to sharing the pizza with imaginary friends who visit for dinner. For the bulk of the episode, the child and mother discuss how to share the pizza fairly among various numbers of visitors, as the child, and at times the mother, cuts the pizza into slices. In addition to cutting and counting the slices, on occasion, they talk about whether the slices are fair, namely the “same size.”

As the RA video records, Penn’s mother joins her preschool son, who is seated on the floor with some plastic toys (e.g., a whale, a rat) and a basket of miniature cars nearby. After attending briefly to the plastic animals, the son begins to sort through the cars in the basket, looking for any broken ones that he might discard. After the mother watches the boy line up several of his cars in pairs, one pair behind another pair, near the edge of the carpet, she asks “if he’d like to play the counting game” with his cars. While the son agrees, they at first talk about how some of his cars are the same (e.g., “two tow trucks” and “a black one and another black one”). Almost simultaneously, the mother begins to set up the game, by relocating a small number of the same colored cars in a horizontal line close to her, and a small distance away from the pairs of cars the child had created. While she had intended to play a “take-away” game, they instead talk about the number of cars of similar color, which she, or the child, gathers together, and to which the child adds more. When the mother and child decide to “build” the town, the conversation shifts towards the “parking spots” the child makes, and later, back to the cars he parks in them.

Cite this chapter as:
Anderson A., Anderson J. (2020) “Pedagogical” Mathematics During Play at Home: An Exploratory Study. In: Carlsen M., Erfjord I., Hundeland P. (eds) Mathematics Education in the Early Years. Springer, Cham