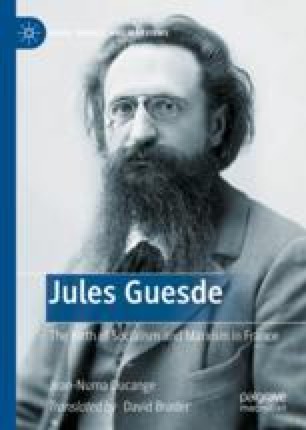 Guesde and Guesdism had an important legacy, at least up till the 1970s. In both the Socialist and the Communist parties he was one of the greats—a figure honoured over decades. Jaurès was long celebrated in direct connection with Guesde, and for a long time broad layers of militants even preferred Guesde to Jaurès as a figure. With the emergence of the new left in the 1960s, the term ‘Guesdism’ became a form of stigma, thus helping to mask the role this figure had played in the French left.

Guesde is thus no longer anything but a negative figure on the French left. At worst, he is associated with a deadly sectarianism and at best with a perfunctory ideology that masked far from honourable practices. For the radical left he is the dogmatist who then became a minister in the Union sacrée and rejected the Bolshevik revolution. For the governmental left, he embodies the intransigent ideologue who prevented the aggiornamento of the French left. And for all of them, his commitment to the antidreyfusard cause condemns him to the margins of militant memory.

Yet to turn a blind eye to the study of Guesde is to fail to understand the origins of Marxism in France—of whatever sensibility. The fundamental uniqueness of Guesde, as compared to the ‘thousand Marxisms’ of various different horizons—sometimes excessively intellectualised and coming from countries where Marxism has never constituted (or only marginally so) a reference point for any powerful political organisation—is that, for better or worse, he helped leave a lasting Marxist-inspired imprint on the French left. To forget him or to denigrate him by taking him out of context is to deny ourselves one of the keys to understanding more than a century of organised socialism. To say this is not to ‘rehabilitate’ Guesde—something that would make no sense given the structural political and social changes in the twenty-first-century France. Rather, it is an attempt to understand the impact of the various inheritances that have so enduringly moulded the political terrain. The few historians who have ventured into Guesdist territory since the 1970s do, all in all, take up this approach. As the historian Madeleine Rebérioux said in 1973—taking more of a distance than back in 1965—Guesde and his current embodied ‘a rudimentary affirmation of class: the capitalist bourgeoisie and proletariat setting up camp in opposition to one another. There reigns a merciless war between these two enemy camps.’63 This ‘rudimentary affirmation’ could be adopted and complexified by others without ever truly disappearing. Guesdism left its mark on the history of several regions: in the North, where ‘it was indeed class consciousness and also class pride that grew with Guesdism’ as well as in the South where to call oneself a Guesdist is to be further ‘to the Left of the Left, in the good old republican tradition. A socialism which is socialist through inheritance—and no longer a socialism of rupture.’64

In a similar spirit, in the 1980s, Claude Willard published a series of documents and contributions on Guesde. Alongside a remarkable selection of texts collecting previously unpublished correspondence on the origins of the Parti Ouvrier, he published a brief biographical essay in 1991. Madeleine Rebérioux then Gilles Candar made space in the history of socialism for Guesde and the Guesdists, regularly housing contributions on this current in the Bulletin de la société d’études jaurésiennes, which then became Cahiers Jaurès. Outside of France, it is Robert Stuart—cited repeatedly in this present volume—who has offered one of the most accurate and suitably distanced views of this current. He first did so in Marxism at Work in 1992, and then in a 2006 survey of the Guesdists’ approach to the national question, emphasising the ambiguity of their attitudes.

It is worth noting that Lafargue and his Right to Be Lazy—which is regularly republished—has better stood the test of time. The object of multiple essays, the memory of Guesdism is despite everything far more represented by Lafargue.65

But the wave that swept across the memory of Guesde in the 1970s did not carry off everything. At the local and even regional levels Guesde remains a figure who—even if not well-known—can occasionally be cited, without any anathema against him. Throughout the twentieth century, many Socialist and Communist municipalities across France named a street after Jules Guesde—and in Le Nord often also public buildings, like the schools established in the 1920s. The communes of Paris’s old ‘banlieue rouge’ almost all have a Rue Guesde. All in all, we can count some 376 Rues, Boulevards, Places or Impasses Jules Guesde across France’s territory; by way of comparison, this is, doubtless, far behind Jaurès (with over 2000 such locations named after him) but twice as many as Édouard Vaillant.66 The statue in Guesde’s honour in Roubaix is still standing.

Until relatively recently, Guesde’s name was still well known among the Socialists in the Fédération du Nord. For instance, in the early 1980s it published an educational pamphlet where we can read:

His knowledge of Marxism was rather summary, but he was able to draw out its basic principles and, most importantly, popularise them. Thus, through his texts and his speeches he spread the concepts of the class struggle and the collectivisation of the means of production. He insisted on the need for the organisation of the proletariat. … If through loyalty and selflessness he long remained intransigent, nonetheless he was later able to become an example of the spirit of unity. His lesson is still valuable for our present and our future: we have to be able to cultivate our differences even while carefully preserving our Unity, the foundation of our strength!67

Guesde’s portrait long had pride of place in the corridors of Le Nord’s Socialist Federation. And on rare occasions he was still saluted, or more often, cited, even by socialists of the very highest level—on condition, that is, that he was limited to his regional dimension. Pierre Mauroy, a leading socialist in Le Nord and prime minister in François Mitterrand’s government in 1981, regularly mentioned Guesde, even if he said he ultimately preferred Jaurès. Making no particular commentary on him, the former Rocardian Manuel Valls—a prime minister under François Hollande’s presidency, who could little be suspected of sympathies for Guesde—mentioned him in passing in a March 2016 Fête de la Rose in Wattrelos (within Guesde’s own constituency):

It has not been possible to find any other recent occurrence of a nationally important political leader making a similar reference to Guesde.

‘What a fine restitution of dogmatic energies!’69

In his 1945 essay Utopia and Socialism Martin Buber mounted the case against ‘scientific socialism’ for having buried socialism’s original utopian dimension, indeed in lasting fashion. The context lent itself to this, at a time when an often very dogmatic ‘Marxism-Leninism’ was enjoying its moment of triumph. After this many theorists and historians followed Buber’s line of argument. Falling into the same trap set by Engels in his Socialism: Utopian Scientific, for the most part they reasoned just like the man they intended to put to the sword. They rehabilitated utopia in opposition to science, just as previously science had unambiguously condemned utopia. One rigid definition followed another, as if its worthy heir.

In truth, at least up till the very end of the nineteenth century, even the hardest partisans of ‘scientific socialism’ activated the resources of utopia in their political propaganda, even as they dismissed it in words. One fine connoisseur of the political language of this period—and, moreover, one very critical of Guesdism, seeing it as a forerunner of Stalinism—is Marc Angenot. He aptly remarks that ‘Guesde’s Marxism is a syncretism of the social critiques and the prophesies on the future that came from the reformers of 1830 and 1848 and their epigones in the Empire, in which Marx’s “ideas” served as regulators making it possible to separate the wheat from the Proudhonian, Blanquist or communalist chaff’.70 Robert Stuart, for his part, remarks that ‘for the Parti Ouvrier the concentration of capital did not have the sole effect of mobilising the proletariat against capitalism but also that of building the infrastructure of utopia’.71 Guesde’s rather dry talks also contained—doubtless, in a very specific way—a utopia which appears to have been a mobilising force. Many contemporaries who knew Guesde report that the fascination surrounding him came from his ability to tell of the coming of a better world. Thus his rigid scientism was able to make several generations of socialist and communist militants dream, despite the split of 1920. Ultimately—and paradoxically—trenchant characterisations do not manage to grasp a man who so often used them himself.

Later from 1936 and 1945, some of the social conquests that had now become reality could appear as one of his legacies. Thus in 1966 Mireille Osmin could say of Guesde that ‘even though the revolution has not taken place, some of his vistas on the future have become reality’.72 Does that mean that Guesde still has a legacy even for our own time? Wherever people advocate a break with capitalism, where the vocabulary of the class struggle still has a place, in short, wherever the ‘Marxist superego’ has not been buried, it seems that Guesde has left a deeper trace than things might otherwise suggest. His shadow even today looms over the clashes at the congresses of those organisations that still officially identify with socialism. Without Guesde, and in particular without the social and political dynamism of a current that he embodied over several decades, the French—and perhaps even international—left would probably have not travelled down the same paths.

In this lies his grandeur—and his importance to history.