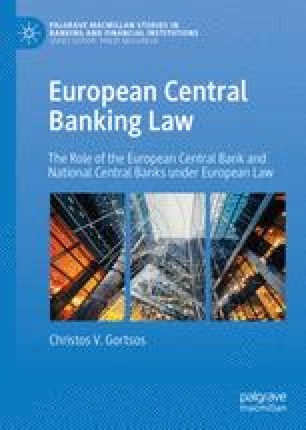 This chapter discusses the institutional aspects governing the systems and mechanisms participated in by the European Central Bank (ECB) and the national central banks (NCBs). The first section elaborates on the composition and legal nature of the European System of Central Banks (ESCB) and the Eurosystem, the objectives, tasks and financial provisions of the ESCB, as well as the role of national central banks therein. The second section presents (in more detail than in Chap. 4) the Single Supervisory Mechanism (SSM), with an emphasis on its two components, while the third briefly discusses the Single Resolution Mechanism (in particular with regard to aspects of relevance to the ECB) and, then the fourth analyses the two components of the European System of Financial Supervision (ESFS), that is the European Banking Authority (EBA) and the European Systemic Risk Board, with specific reference to the SSM as part thereof. Appendix of this chapter contains an analysis of the role of the EBA in the making of European banking (and, in general, financial) law.

Appendix: The Role of the EBA in the Making of European Banking (and, in General, Financial) Law

The legal acts which constitute the sources of EU banking (and, in general, EU financial) law are adopted pursuant to the TFEU, which provides for ‘legal instruments’ and ‘soft law (non-legal) instruments’.178 In particular, Article 288 (first sentence) TFEU stipulates that “to exercise the Union’s competences the institutions shall adopt regulations, directives, decisions, recommendations and opinions”. The legal nature of these legal instruments is as follows:179 Regulations, Directives and Decisions are the main legal instruments: Regulations have general application, are binding in their entirety and directly applicable in all Member States; Directives are binding, as to the result to be achieved, upon each Member State to which they are addressed, but leave to the national authorities the choice of form and methods; and Decisions are binding in their entirety and if they specify those to whom they are addressed, they are binding only on them. Recommendations, as defined in Article 292180 and Opinions, are soft law instruments and have no binding force.

(2) The legal acts, which constitute the sources of EU banking law (with the exception of those of the ECB), are adopted at three levels according to the terminology of the ‘Lamfalussy process’, which is still in use, and at the first two levels in accordance with the above TFEU Articles:181

‘Level 2’: at this level, the Commission may be empowered by virtue of a ‘Level 1’ legislative act to adopt delegated acts and implementing acts, in accordance with Articles 290–291 TFEU, respectively, usually adopted on the basis of draft regulatory and implementing technical standards developed by the EBA.

‘Level 3’: finally, at this level, the EBA adopts Recommendations and Guidelines.

This legislative process enables the adoption of rules by EU institutions with the active involvement of supervisory authorities, through the EBA, which de facto has a definitely superior technical knowledge of the subject matters.182

Legislative acts, as defined in Article 289(3) TFEU, mean the legal acts adopted in accordance with either the ‘ordinary legislative procedure’, or the ‘special legislative procedure’; as a rule, they are adopted upon a Commission’s proposal, as stipulated in Article 17(2) TEU.183 According to Article 289(1) TFEU, the ordinary legislative procedure consists in the adoption by the European Parliament and the Council of a Regulation, Directive or Decision on a proposal from the Commission, according to Article 294 TFEU. The practice of EU institutions to mainly issue Directives, rather than Regulations is founded on Protocol (No 2) “on the application of the principles of subsidiarity and proportionality”, annexed to the Treaties.184 This approach prevailed due to Member State pressures to preserve the principle of subsidiarity and use the form of legal acts (namely Directives) which would provide them with the greatest possible flexibility when transposing EU law provisions into national legislation. Article 289(2) TFEU provides that the special legislative procedure consists in the adoption of Regulations, Directives or Decisions either by the European Parliament with the participation of the Council, or by the latter with the participation of the former.185

(2) Particularly as regards the provisions of EU financial law, in Declaration 39 concerning provisions of the Treaties,190 the Commission states its intention “to continue to consult experts appointed by the Member States in the preparation of draft delegated acts in the financial services area, in accordance with its established practice”. According to Article 10 EBA Regulation, the European Parliament and the Council are entitled to delegate powers to the Commission to adopt regulatory technical standards (the ‘RTSs’) by means of delegated acts, as defined in Article 290 TFEU.191 In such a case, the EBA must define the content of its draft RTSs on the basis of the restrictions set out in Article 290 TFEU, as further qualified in Article 10 EBA Regulation. These standards, technical in nature, do not imply strategic decisions or policy choices; their content is delimited by the legislative acts on which they are based.192

(2) At this level, the EBA develops draft implementing technical standards (the ‘ITSs’) according to Article 15 of its statutory Regulation, which are submitted to the Commission for adoption by means of implementing acts. These standards, similarly to regulatory technical standards, are technical in nature, do not imply strategic decisions or policy choices and their content is to determine the conditions of application of the legislative acts on which they are based.197 They have been broadly used to provide for common templates and instructions, mainly for reporting purposes.198

(1) The EBA has the power to issue Guidelines and Recommendations in areas not governed by regulatory or implementing technical standards. Their objectives are to establish consistent, efficient and effective supervisory practices within the ESFS, and to ensure the common, uniform and consistent application of EU law199 and their addressees either competent authorities or financial institutions.200 Forming part of European ‘soft’ law, they do not have a legally binding character,201 but competent authorities and financial institutions must make every effort to comply with the provisions of these Guidelines and Recommendations on the basis of the ‘comply or explain’ principle.202

Furthermore, the EBA must inform in its Annual Report the European Parliament, the Council and the Commission of the Guidelines and Recommendations issued, explicitly stating which competent authority has not complied with them and outlining how it intends to ensure its compliance in future. Finally, if required by a given Guideline or Recommendation, financial institutions must also report, in a clear and detailed way, whether they comply with (Table 5.5).203

Note: The ECB has to be consulted on any proposed EU legal act according to Article 127(4) TFEU

cAccording to the comitology procedure (Regulation (EU) No 182/2011)