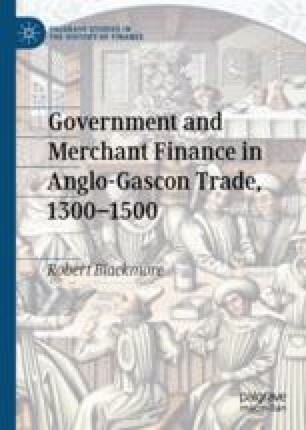 This chapter illustrates the close link between trade, monetary flows, credit, and investment. The key institutions of mercantile finance—investment through enforceable debt and equity partnerships—were both dependent on their underlying commodity markets. Capital in commercial enterprises thus originated in privileged centres of the wine trade, particularly Bordeaux and London, though England’s West Country contributed considerable shipping. The very volatility of those markets created serious problems in 1337–44, 1348–50, 1368–75, 1405–8, and 1437–45, when war and plague led to a collapse in investment in goods and ships. Merchants formed new associations as an adaptation to pool capital, which, though successful in the short run, proved insufficient to prevent an overall decline in trade.

Cite this chapter as:
Blackmore R. (2020) Mercantile Finance. In: Government and Merchant Finance in Anglo-Gascon Trade, 1300–1500. Palgrave Studies in the History of Finance. Palgrave Macmillan, Cham