Discoveries at the Frontiers of Science 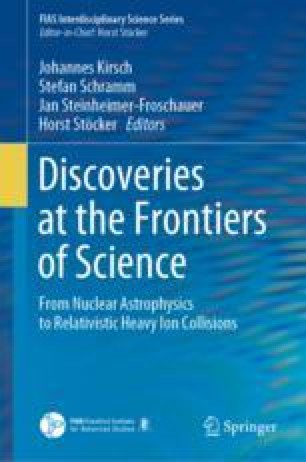 Discoveries at the Frontiers of Science pp 225-237 | Cite as

We concentrate here on photon absorption as well as electron and positron scattering upon endohedrals that consist of a fullerenes shell and an inner atom A. The aim is to understand the effect of fullerene electron shell in formation of corresponding cross-section. We consider the problem substituting the action of a complex multiatomic fullerenes shell by a combination of static pseudopotential and dynamic polarization potential. The electron correlations in the atom A are taken into account in the frame of the random phase approximation with exchange (RPAE). We demonstrate that the fullerenes shell strongly affects the cross-sections, bringing in a number of peculiarities, such as confinement resonances and giant-endohedral resonances and partial wave Ramsauer-type minima. Numerical data are obtained for endohedrals A@C60 and A@C60@C240, where A are noble gas atoms He, Ar and Xe.

I dedicate this article to the blessed memory of my friend and colleague professor Walter Greiner.

(Personal recollections based on half a century long acquaintance)

With the presented article I pay tribute to my old friend professor Walter Greiner, for me Walter, since we were “av du” for more than half a century. Best tribute for a big scientist is discussion of new scientific results. Indeed, each of us is mortal, but Science is immortal.

I vividly remember our first meeting at the Ioffe Institute in former Leningrad, I guess, in the very middle of sixties.

Just at that time, I was pushed off nuclear physics that was my topic before, and have concentrated on applying many-body theory approach to atomic instead of nuclear physics. Walter was interested mainly in nuclear physics, but many-body diagram technique seemed to be good in both domains, namely in studies of multi-nucleon nuclei and multi-electron atoms.

We discussed concrete scientific problems of common interest, such as Giant resonances in both nuclei and atoms. However, particularly great attention we paid to the theory of groups, planning to concentrate in the nearest future on starting experimental activity in this direction of research. It was not mathematics. We discussed the way of organization of big scientific groups that would work not as a simple sum of researchers but as a coherent well-organized team. We both agree that scientific productivity without loss of quality of research could be greatly increased in this case. However, it was clear that one has to introduce many organization modifications. For example, Walter suggested regular communication via, perhaps, even written directives from the group leader to his subordinates. Do not know, whether he managed to materialize this idea.

To organize a big and stable group cemented not administratively, but by interest to work under a respected group leader, with members being motivated by love to science, was a challenge. The members of such a group have to be able to sacrifice, at least to some extent, their individuality to the love of collective work. This was a challenge both in the USSR with its kolkhoz traditions and habits, and in the Western individualistic community.

We understood that collective work would increase the number of co-authors in any publication. Only by including many co-authors, one could organize a brainstorm that would increase the effectiveness of the research considerably. In such an approach, almost each participant of the brainstorm would become an author. Of course, in case of failure, such an approach could lead to friction among participants and eventually to decay of the group. The organization of collective research with coherent effect belongs to a weakly developed domain of organization of creativity, addressing at first the fundamental issues: whether this is possible at all, and could it be useful. If we come to two “yes” than one has to find the way “how” to implement all this in the real life.

The great experiment of Walter permitted to give very impressive positive answers to all these questions. Walter managed to organize such a group that many people considered as impossible and even counter-productive. I remember numerous discussions between prominent physicist in that time USSR on the subject that was ignited by Walter’s visit. Not only I, but also my considerably older and experienced colleagues were very much impressed by his deep intuition as a physicist and the broad range of his ideas. Let me remind you that at that time he was only about thirty years old. My discussions about him with older colleagues, including A. Migdal and Ya. Smorodinsky demonstrated that he was accepted as a promising scientific leader, however all but Migdal were sure that his experiment on new way of organizing scientific research would fail. Fortunately, the big majority proved to be wrong.

With time, Walter managed to build a great pyramid. A number of his former students and group members became prominent scientists. All this is an outstanding achievement.

During our memorable conversations, Walter described interesting formal relations that he planned to have with his students. Twenty years later, I had a privilege almost a year to be a witness of such relations and found that they were useful and fruitful.

During these discussions, Walter has made his prediction of Great Reunification or Great Merge (do not mix it with Great purge!). In spite of its importance, this prediction was never published and even not widely publicized, so, perhaps, I am the only one who can confirm now that indeed such a prediction took place. It was experimentally confirmed almost a quarter of a century later, in 1989. I have in mind the Reunification of Germany. Already during our first discussions, we touch political issues. When I mentioned the now late GDR as an independent German state, Walter answered sharply, with a knock by his palm upon the table: “It can be and will be only one German state that unites all Germans”. This was a prophetic prediction of historic process that seemed to me simply impossible giving the power of the USSR and the East block at that time. Let me mention that during this conversation I was looking with fear at the telephone on the table in my room that could inform “interested” what we dare to discuss!

More or less by chance, I have visited Frankfurt in the spring of 1989. My hosts were Greiner and G. Soff. Walter suggested me to spend in Frankfurt a longer period and nominated for Humboldt research prize. I have received it in 1990 and spent in Germany five months in 1991 and five – in 1992. This prize modified my life powerfully and positively in many aspects. I was very much impressed by the enthusiastic scientific atmosphere that I felt during all my stay. I acquired a number of new friends, and not only among scientists, both Germans and foreigners. This stay was very fruitful for me and I am grateful to Walter for this.

When Walter invited me to come, some of my friends predicted that I would have a hard time since my host will force me to co-authorship. How they were wrong! Walter and I had many discussions, common interests in a number of directions. It appeared that we have almost the same views on a number of scientific (as well as non-scientific) problems, but did not presented even a single common talk or submitted a publication. I did not feel a smallest push toward co-authorship. I attended very many seminars at the Greiner Institute. What I saw on the weekly bases was that in all presented at seminars talks, later published as articles with the speaker as the first author and Walter as the last, in all seen by me cases, he was the main source of the principal idea of the work.

Walter indirectly, by himself as a positive example, taught me how to conduct a seminar to make it a source of inspiration to the speaker. He managed always to concentrate on something interesting and useful in the presented work, finding a reason what for to thank the speaker. His politeness during pallavers, careful praising each speaker, even if the presented work or the talk itself from my point of view did not deserve anything but strong criticism, amazed me. Literally, his motto was “Do not forget to say “thank you” not only to those who are in power and above you, but also to those who depend upon you”. For me it was quite different from what I saw in the USSR, particularly among members of the famous Landau school, and what I followed conducting my own seminar during more then twenty years.

Several years after we met for the first time, he wrote me that moves to atomic physics, having in mind the process of generating of positrons from vacuum under the action of strong, so-called critical, electric field. As far as I know, he was one of the motors, if not the strongest one, behind the idea to create such a field in heavy ion collisions. This was one of the most important ideas implemented in GSI. Although difficulties with separating “overcritical” positrons from that created because of collision process itself proved to be impossible to overcome, the creation of GSI became a great and long lasted success.

During my stay, Walter several times turned to the problem of Jewish Catastrophe under the Nazi regime. He literally felt personal responsibility for the tragedy that happened, and wanted at least somehow to repair the damage not only to Jewish people but also to German science and culture. It was not only words, but also some concrete actions, e.g. organization of long stays and collaboration with Judah Eisenberg, and convincing Walter Meyerhof, son of Otto Meyerhof, Nobel prize winner, to come back to Germany at least for a shot stay. Note that Meyerhof promised never visit Germany after he and his father fled this country after Nazis came to power. Greiner was several times in Israel and became honorary professor of the Tel Aviv University. In 1999 he has a plan to divide the International Symposium Nuclear Matter-hot and dense, dedicated to the memory of J. Eisenberg, into two parts, in Tel Aviv and Bethlehem. However, information about planned terrorist attack in Bethlehem prevented materialization of this plan, and all the conference was in Tel Aviv.

Walter was deeply interested in understanding what is going on in Soviet Union during the period that was called perestroika. He took close to his heart the unexpected hardships that almost overnight made the life of Soviet scientist so difficult. He felt not only abstract co-passion but also actively helped in establishing new relations between German and USSR scientists. At first, I want to mention that he managed to bring to Germany for long stays a number of that time young Soviet scientists, to mention only a few of them, M. Gorenshtein, I. Mishustin and my former students A. Soloviev and A. Korol. They were well accepted by the Greiner Institute at the Frankfurt University and after at FIAS that was organized to large extent by Walter.

His help included not only invitations to a number of Soviet scientists to spend in Germany a considerable period. Together, we wrote letters to Riesenhuber, to some other people in the Ministry of science and Education with the aim that could be formulated as “Save Soviet Science”. Having in mind much broader cooperation than science, he connected me to the Deutsche Bank Vice-President.

Walter’s kindness and attentiveness had no limits and not only I, but a number of people of the former USSR are grateful to him forever.