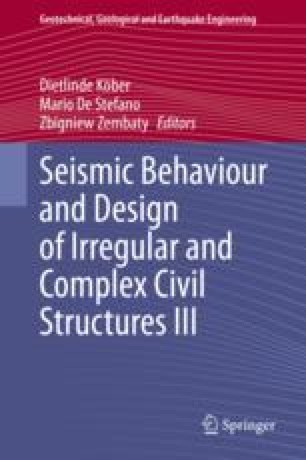 In this paper, the Mode-Adaptive Bi-directional Pushover Analysis (MABPA) previously presented by the author is modified by considering the higher (third) mode response. The modifications proposed in this paper are (a) the peak response of the third mode is estimated from the independent single-degree-of freedom (SDOF) model representing the third mode, and (b) the peak response of each frame is predicted by combining the results from the original MABPA and the third mode response using the square root of the sum of square (SRSS) rule. The modified MABPA is applied to two six-story asymmetric building models with bidirectional setback. The predicted results are compared with time-history analysis results and other simplified procedures; modal pushover analysis (MPA), improved modal pushover analysis (IMPA), a variant of MPA considering bidirectional excitation by (Manoukas G, Athanatopoulou A, Avramidis I, Soil Dyn Earthq Eng 38:88–96, 2012) and (Manoukas G, Avramidis I, Bull Earthq Eng 12(6):2607–2632, 2014), and the original MABPA. The results show that the predicted peak response at “flexible-edge” frame by each simplified procedure agree well with the time-history analysis results. On the contrary, the predicted peak response at the “stiff-edge” frame according to each simplified procedure is different: some of the predicted results, including the results via original MABPA, underestimate the time-history analysis results, while the results via modified MABPA are conservative compare to the time-history analysis results.