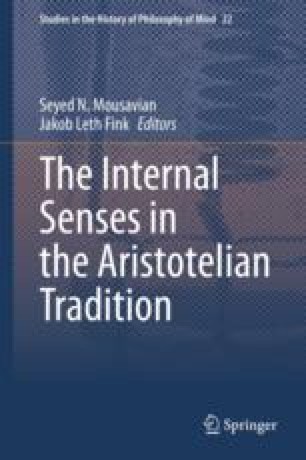 Movements, Memory, and Mixture: Aristotle, Confusion, and the Historicity of Memory

Chapter
Part of the Studies in the History of Philosophy of Mind book series (SHPM, volume 22)

Aristotle frequently discusses specific material constraints on memory and recollection. This essay reinterprets his fluid physiological psychology of memory, which depends on the stability of bodily movements or traces, in light of his general theory of mixture. It proposes new ways to link memory and metaphysics in the Aristotelian tradition; counters a popular historical narrative which sets Aristotle at the origin of a static Western ‘archival model’ of memory; and suggests the relevance for contemporary philosophy and science of Aristotle’s view of the potential existence of movements in memory.

My sincere thanks to the editors of this volume, and to the organisers of the outstanding 2016 conference at Goteborg, from which I learned a lot. Seyed Mousavian’s questions in particular have helped me improve the final version. The ideas developed in this essay were first investigated in 1993, when I presented talks on confusion and mixture to audiences in philosophy and ancient history at Macquarie University and the University of Sydney. I returned to the topic during a visiting fellowship at the Institute for Advanced Studies in the Humanities at the University of Edinburgh in 1999, for which I am very grateful, and presented a talk in the Edinburgh Department of Philosophy. Among those who influenced, helped, or challenged me on those earlier versions of this material I remember and thank in particular Rick Benitez, Deborah Brown, Paolo Crivelli, Stephen Gaukroger, Richard Holton, Rae Langton, Catriona Mackenzie, Doris McIlwain, Dory Scaltsas, Godfrey Tanner, and Harold Tarrant. My colleagues in the McGill-based Early Modern Conversions project, especially Ben Schmidt, Mark Vessey, Bronwen Wilson, and Paul Yachnin encouraged me to return to these topics. For more recent assistance I am grateful to Graeme Friedman and to Christine Harris-Smyth. The penultimate version of the essay was written in 2017 while I was a Collaborative Visiting Fellow at the Institute of Philosophy in the School of Advanced Study at the University of London: I am very grateful to Ophelia Deroy, Barry Smith, Richard Somerville, and all those at the Institute for making my stay so enjoyable.

Cite this chapter as:
Sutton J. (2020) Movements, Memory, and Mixture: Aristotle, Confusion, and the Historicity of Memory. In: Mousavian S., Fink J. (eds) The Internal Senses in the Aristotelian Tradition. Studies in the History of Philosophy of Mind, vol 22. Springer, Cham