The Practice of Lending 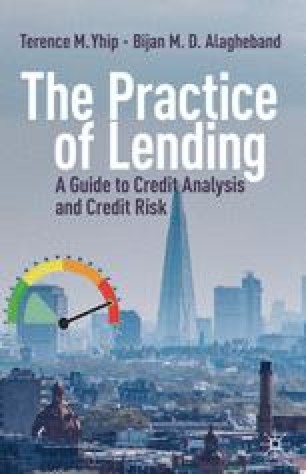 This chapter applies the criteria-based approach to the banking industry. Commercial banks are different from other enterprises in their core activities and thus the variables that determine bank failure are different. A commercial bank earns the bulk of its income from long-term loans funded by shorter-term retail deposits and wholesale borrowings—a process called maturity transformation. The chapter provides the conceptual framework to analyse a bank’s financial statements and to narrow the focus to the business environment, quality of management (including risk management) and governance, and financial strength. This last includes a comprehensive and thorough examination of asset quality, and the adequacy and quality of liquidity and capital. The chapter explains important metrics such as Basel III capital ratios, economic capital, and Value at Risk.

Bank size is an important consideration in designing a scorecard. First, small banks with limited and unstable funding base and heavily dependent on NIM income for bottom-line profit, hence, are more likely to fail than big banks when economic adversity strikes. The larger diversified banks, with their more varied business, are generally in a stronger position to recover from external shocks. Data from the US FDIC (Federal Deposit Insurance Corporation)53 provide supporting evidence of the high failure rate, as shown in Table 7.17. Banking is pro-cyclical and the period covers four recessions or periods of depressed economic activity to observe the behaviour of banks.
Table 7.17

The data support the following tendencies:

In regard to balance sheet size, the classification of bank size is arbitrary. The US Federal Reserve defines “large banks” as those with consolidated assets of $300 million or more.56 In contrast, a prudential definition of a big bank size was based on the $50 billion threshold, which came about in the aftermath of the 2008–2009 financial crisis and the 2010 Dodd-Frank Act, also known as the Systemic Risk Designation Improvement Act. The law required bank holding companies with more than $50 billion in assets to be subject to enhanced prudential regulations. In May 2018, Congress approved a bill to dismantle key parts of the 2010 Dodd-Frank act that decided which banks were designated “too big to fail”. Under the new rules, a bank is systematically important if it has $250 billion or more in assets. That covers 13 G-SIBs (global systemically important banks), compared to 44 in 2008 in the aftermath of the financial crisis. These banks face the strictest banking regulations. As we said before, we ignore the question of bank size, though it is an important rationale for having separate scorecards.

The second consideration is that the Basel capital ratios are just the minimum international requirements, regardless of bank size. At the national level, regulators use their own discretions, and usually impose tougher rules than Basel. Data for the G-7 countries and China, shown in Fig. 7.7, show that average capital ratios exceeded the Basel minimum requirement of 10.5%. One explanation for this behaviour of banks worldwide is that the cost of higher capital requirements is offset by the lower risk premium for funding. A bank with a bigger capital buffer is stronger and better able to attract cheaper capital, thus enabling it to maintain its level of lending. Inasmuch as the market drives capital buffering, we would expect that the average bank’s capital ratios would exceed the regulatory minimum and would be closer to the mid-point of the rating scale. In other words, a bank must do even better than the minimum just to be in the upper 50 percentile. We incorporated this second consideration in creating the ranges for capitalisation in Table 7.11.

Appendix 7.2: Bell Curve for Three Standard Deviations from the Mean

Grading on the curve starts with the assumption that financial ratios come from a normally distributed population with unknown mean (μ) and unknown standard deviation (σ). The normal distribution/Gaussian/Laplacian distribution, which is a probability density function with mean (μ) and variance (σ2):

We see that about 99.4 (99.7–0.3)% of the observations lie within three standard deviations of the mean, which is close to normal probability in this regard. The cumulative normal frequency gives the percentile for the BRRs. For example, “BBB” rating is in the 50th percentile, meaning that 50% of the total capital ratios are 12.1% (“BBB”) and less, as expected for the median. In the following graph, the cumulative probability for the total capital ratio to be at least 8.0 is measured as the area under the curve from –∞ to 8.0.