Landscape Patterns in a Range of Spatio-Temporal Scales 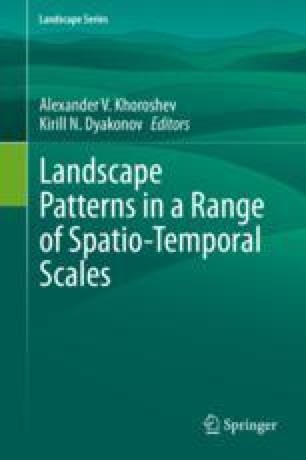 We examine the interrelations between elementary regional landscape and floristic units (microregions) in the basins of medium-sized rivers and lakes on the example the southeast of West Siberia. In conditions of smoothness of zonal transitions and anthropogenic transformation of the territory, it is proposed to establish the differences between microregions using differential types of geosystems or geosystems-indicators, the occurrence of which is controlled by local features of the abiotic template and basin structure. Qualitative and quantitative measures of similarity were used as an additional criterion of regionalization. In case of zonal homogeneity, the types of geosystems are compared, whereas under zonal heterogeneity the types of geosystems-analogs are applied.

Floristic regionalization is based on regional- and topological-level differential and subdifferential species, which enable us to distinguish the floristic microregions. The differential regional-level species reflect the zonality of the territory, and their difference manifests itself at the border of a common areal or its parts. Topological-level differential species are associated with the peculiarities of the abiotic template and basin structure as well as with the presence of specific ecotopes within the compared microregions, which may be zonally homogeneous.

Cite this chapter as:
Zolotov D.V., Chernykh D.V. (2020) Comparison of Landscape and Floristic Diversity in Plain Catchments at the Level of Elementary Regions. In: Khoroshev A., Dyakonov K. (eds) Landscape Patterns in a Range of Spatio-Temporal Scales. Landscape Series, vol 26. Springer, Cham