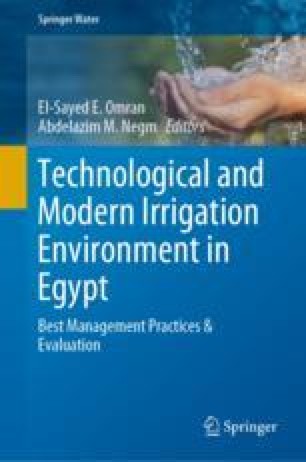 This chapter has described four main parts. The first part covers the history of irrigation in Egypt where the Egyptian man lived around the Nile River and was dependent on the floodwaters of the Nile. At that time, the Egyptian man was farming only at the time of the flood, but in the Delta region, the flood was more. After the flood, farmers were laying their seeds in the wet area. In this period, the kings of the pharaohs were trying to control the water through the construction of dams, canals and diversions. The second part discusses the irrigation systems in Egypt before and after the construction of the High Dam in Aswan and the civilization of ancient Egypt and progress in irrigation crops. After the construction of the dam in Aswan, the Nile River in Egypt became a series of irrigation canals, which led to the expansion of the cultivated area. The third part includes machinery and equipment for irrigation in ancient Egypt, such as shadoof, Archimede’s screw and water wheel (Saqia). The fourth part of this chapter is irrigation systems in Egypt today. Irrigation systems are surface irrigation, sprinkler irrigation, drip irrigation and high water lifting.