Opening and Closure of the Neuquén Basin in the Southern Andes 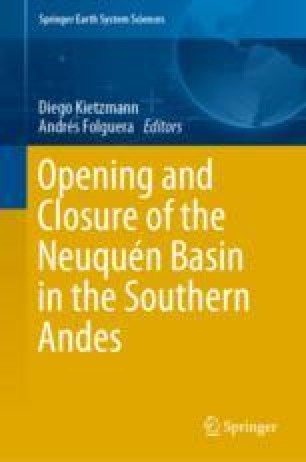 U–Pb dating of detrital and igneous zircons from the retroarc deposits of the Neuquén Basin has shed light over the Mesozoic evolution of the western border of South America, yet the coeval arc and forearc regions remain mostly indirectly characterized. Furthermore, recent paleogeographic reconstructions consider the arc and forearc regions as a tectonically stable and static region at least until Late Cretaceous. In this chapter, we aim to contribute to the Middle Jurassic-Late Cretaceous paleogeographic reconstructions of the western margin of South America from a western point of view integrating the coeval arc and forearc evolution, between 34° 30′ and 36° S. We focus here in the deposits exposed along the Chilean slope of the Principal Cordillera and use four new detrital zircon age data to determine their ages and main source areas. These ages are compared with 38 published U–Pb detrital zircon ages and integrated into a series of paleogeographic cross sections which illustrate the Mesozoic evolution along the Southern Central Andes encompassing the forearc, arc, and retroarc regions. Our data show that the arc and forearc regions were active at least since the Middle Jurassic. Evidence for this tectonic activity corresponds to the development of forearc basins in the Middle Jurassic and Early Cretaceous times. New ages along the Chilean slope of the Andes allow suggesting an early beginning for the compressive period during the latest Early Cretaceous. The formation of a geographic barrier, as a consequence of the compressive regime, would explain the differences in the sediments provenance between western and eastern deposits during the latest Late Cretaceous. Finally, the almost complete record of Mesozoic ages in the detrital and volcanic deposits of the western slope of the Southern Central Andes constitutes a counter-argument about the null or waning activity proposed for the Middle Jurassic or Late Cretaceous from U–Pb detrital zircon analysis of the eastern Mesozoic deposits. Conversely, our data indicate a continued activity of the arc-related volcanism and magmatism throughout all the Mesozoic time.

We are grateful to María Pía Rodríguez for their constructive criticism of early versions of the manuscript, and many useful suggestions which improved it considerably. This work was funded by the Chilean government through the project FONDECYT1161806 (CONICYT, Chilean national research agency). This is a contribution of the Instituto de Estudios Andinos Don Pablo Groeber.

U–Pb dating was performed by the laser ablation inductively coupled plasma mass spectrometry (LA-ICP-MS) employing a Thermo Xseries QICPMS (FD samples) and a Thermo ICapQcquadrupole ICPMS (remaining samples), in both cases coupled with a Resolution M050 excimer laser workstation. The isotopic ratios, ages, and errors were calculated according to Petrus and Kamber (2012). In the data tables, analytical determinations are reported at 2σ uncertainties, which were propagated according to Paton et al. (2010). Analyzed spots were 23 μm, using an analytical protocol modified from Solari et al. (2010), and these were selected after the study of transmitted light and cathodoluminescence images. For each spot, a set of trace elements were also measured in order to monitor possible inclusions in zircon crystals, using the NIST-SRM 610 glass as a reference standard and 29Si as an internal standard (15.323% assumed stoichiometric value).