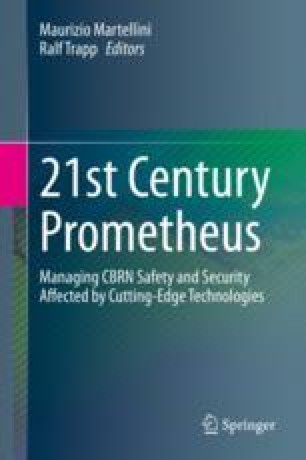 Diagnosing the Cause of Disease: Interactive Teaching Approaches

Interactive teaching approaches have proven to be very effective. This chapter presents two examples that may inspire the reader to use them, or develop their own. The first section arose following detailed discussions between Tatyana Novossiolova and me (Alastair Hay), and we ran the first exercise together, as described in the text, after agreeing the format. Tatyana’s input was vital to the outcome of the exercise.

In the first exercise, cases of atypical pneumonia begin to appear in Citytown. However, the few cases that appear initially multiply rapidly and clinicians are at a loss to explain the outbreak. To make matters worse a festival which draws in much needed tourism, and income, is but a few weeks away. What needs to be done? This is an urgent problem that needs to be solved and it affects many including clinicians, epidemiologists and city officials. Using an interactive approach, with a developing scenario introduced in stages, participants are required to debate the issues and outline what needs to be done at each stage and who needs to be informed. Is it just a national problem? Eventually a zoonotic disease Coxiella burnetti, which causes Q fever, and one of the symptoms of which is atypical pneumonia, is identified. Does its identification alter, or strengthen, approaches to contain the disease? What is the most likely cause of the outbreak? Might it have been deliberate?

Also described is a case about making an illegal drug, Crystal Meth. Although aimed at young chemists the case is not just for them, but for many audiences. Drawing on very different interactive approaches and again, using an evolving scenario, participants are encouraged to discuss issues as they arise and what their decision would be. The case is about recognising the point at which perfectly legitimate chemistry questions morph into more problematic ethical decisions 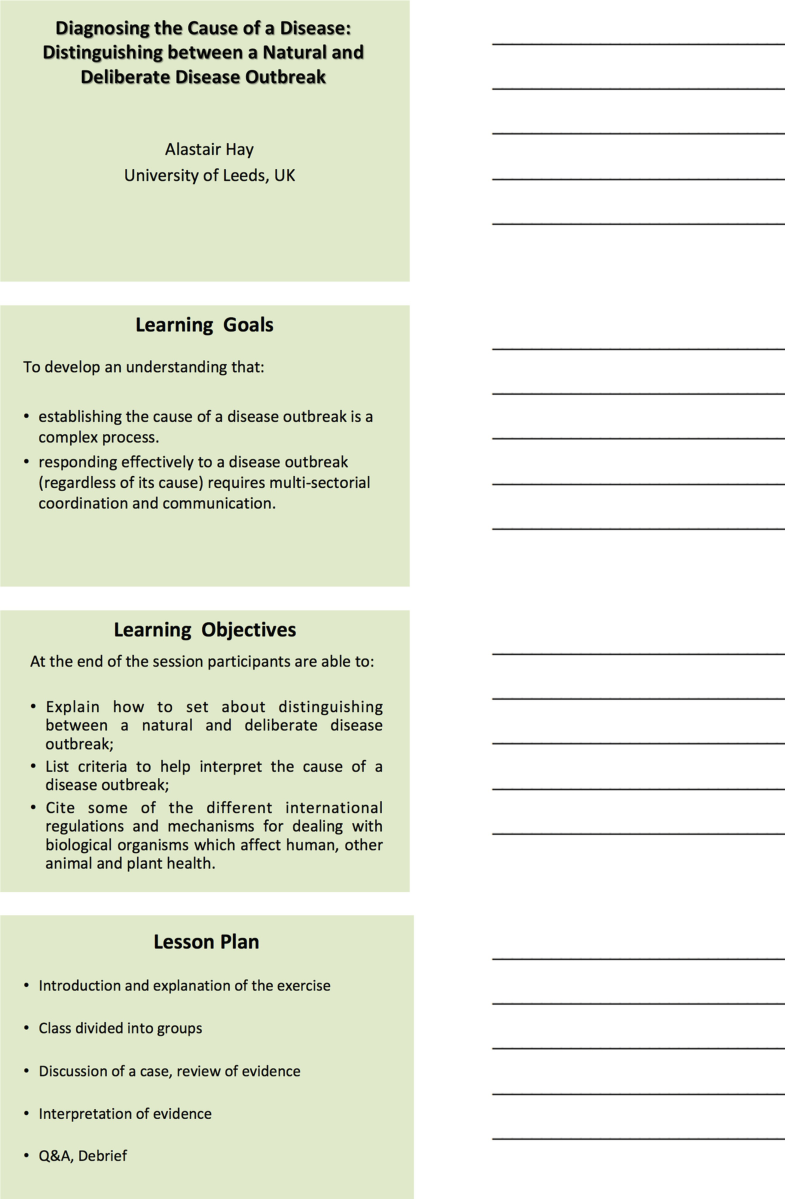 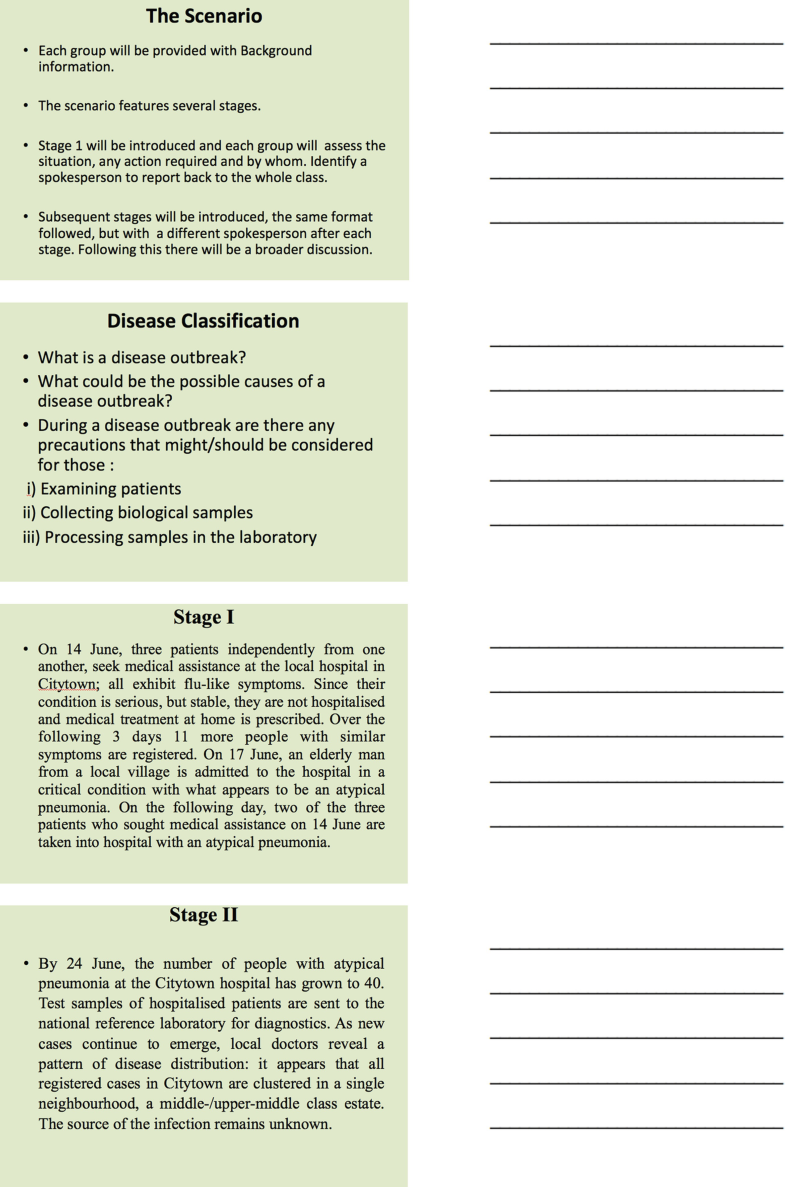 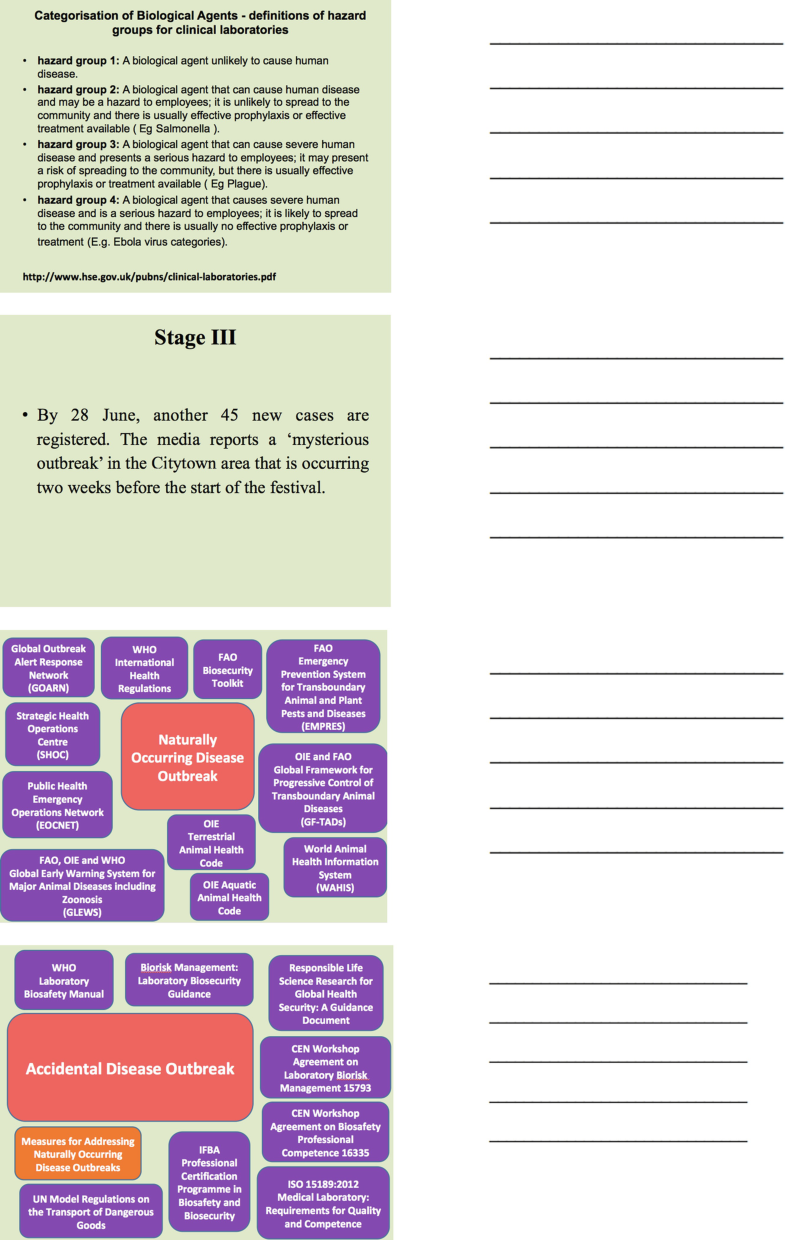 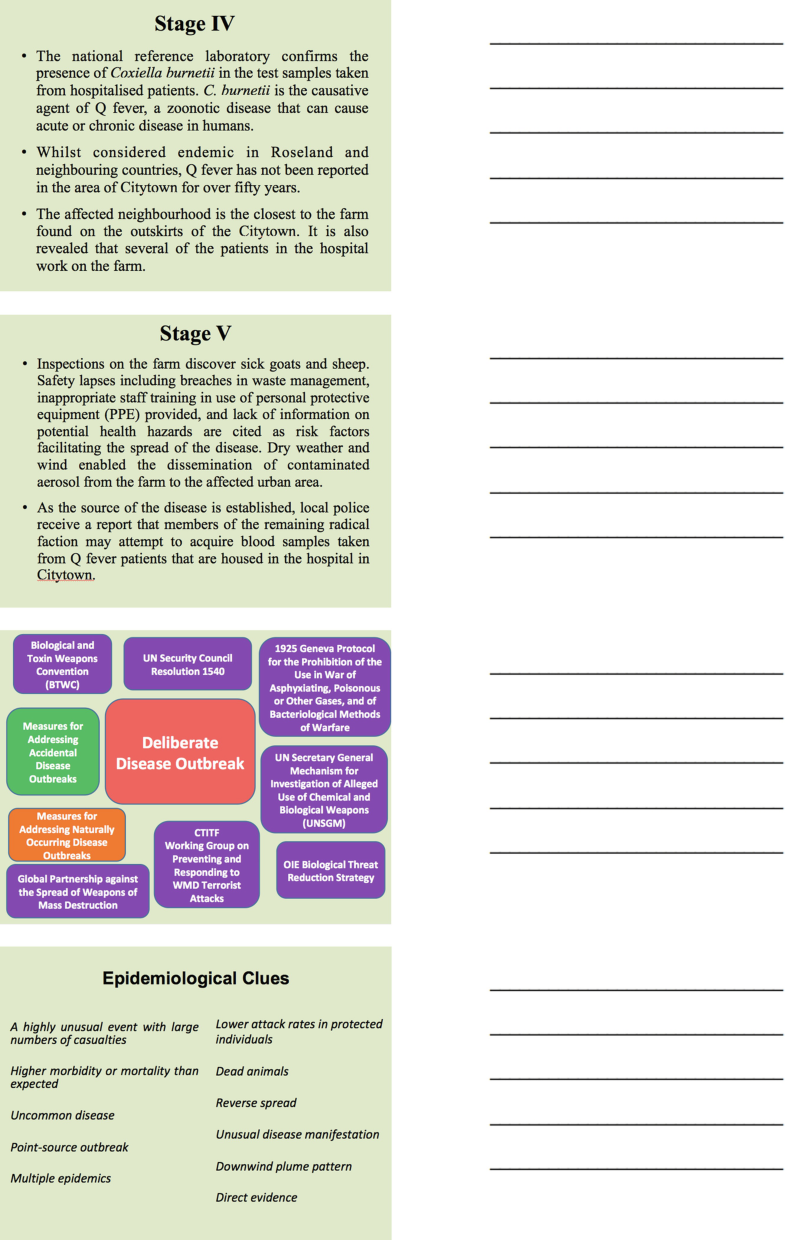 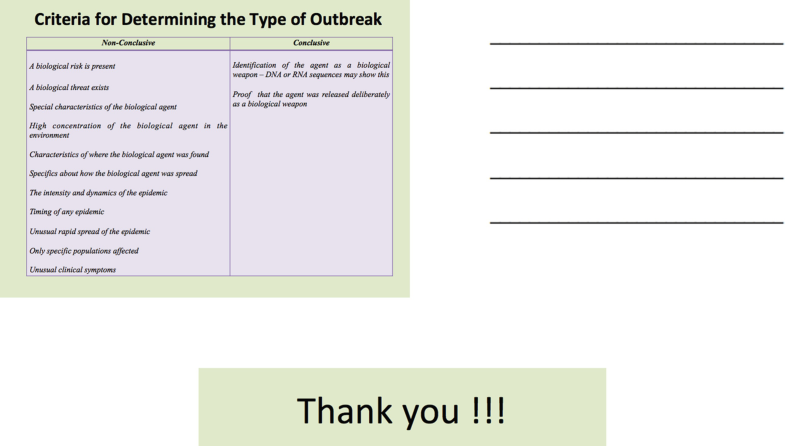 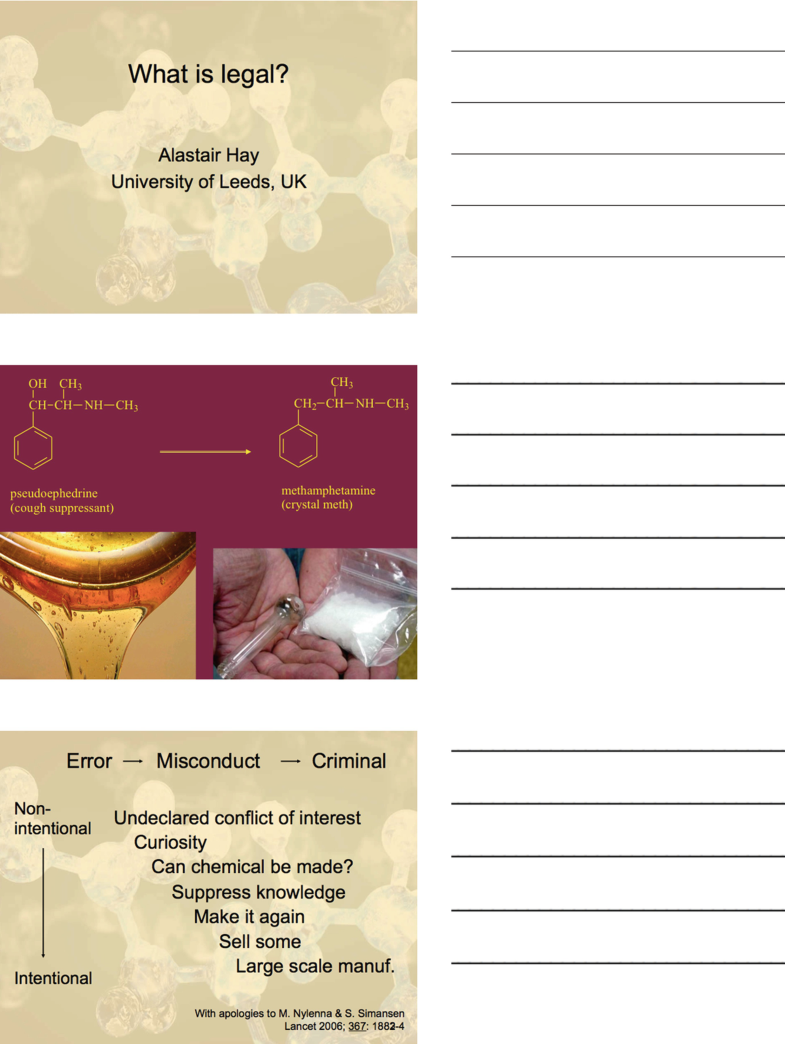 Annex 1: Diagnosing the Cause of Disease

Citytown is a small municipal town in Roseland, a developing country, that until recently has been experiencing political and economic turmoil. Whilst the situation nationwide has become relatively stable, infrastructure in the country remains poor with maintenance and refurbishment dependent on external aid. Roseland is situated in a temperate climate zone.

Prior to the turmoil, the quality of healthcare was of a high standard with many endemic diseases brought under control following the establishment of a nationwide sanitary-epidemiological system. In the recent unrest, however, many facilities have been closed and the remaining ones, including the one in Citytown, suffer from inadequate technical and human resources. A national reference laboratory is operating with a reduced capacity in the capital, Capitalcity, situated some 300 km from Citytown.

Citytown is a predominantly urban area with a population of c. 30 000 inhabitants. The town has renowned architectural features and a centre with many historical monuments and sites of continuing interest to archaeologists which attract tourists from all over the world. The local economy is primarily tourism-based, and has been badly affected by the turmoil with a significant reduction in tourists. A large seasonal festival is approaching which is expected to help revive the economy and generate long-awaited revenue for the local population.

In order to tackle the problem of unemployment in neighbouring villages, a modern farm was set up on the outskirts of Citytown for breeding cattle, goats, and sheep. The farm is Citytown’s main source of milk and dairy products.

The overall political situation in Roseland is generally stable. Most of the radical groups active during the turmoil have now been disarmed, with many of their members arrested. A small para-military faction is active, however, and involved in sporadic attacks on both law enforcement services and civilians.

Slide Deck: Differentiating the Cause of Disease

Diagnosing the Cause of a Disease: Distinguishing Between a Natural and Deliberate Disease Outbreak

Most diseases are the result of a natural outbreak and the cause may be traceable after diligent investigation. Infective agents can be bacteria, viruses, fungi or rickettsia (microorganisms that resemble bacteria, reproduce only inside a living cell and are transmitted by insect bite to vertebrate hosts, including humans).

The nature of the infection, and the agent responsible, have implications for how the infection is investigated and the outbreak contained. Biological organisms vary considerably in their potency, their stability in the environment, how they are transmitted and their mode of action. All of these factors have a bearing on how an investigation into the cause of an outbreak is conducted. For example, with viral infections like hepatitis B, where it is contact with bodily fluids, like blood, that is responsible for the infection being transmitted, simple precautions such as wearing gloves and an apron, avoiding needle stick injuries, and safe disposal of any blood-contaminated material are sufficient to ensure protection for those collecting samples to identify the cause.

But for other agents that may be more contagious and transmitted by aerosol like flu viruses, or the agent in the case under discussion in this training, Coxiella burnetti, where not only is it aerosol transmission that is the issue, but the host for the infection is an animal ( other than human ), usually domestic like sheep or cattle, finding the cause and advising on precautions to take for medical personnel can be difficult. Transmission of C. burnetii is often on farmyard dust ( from hay or straw from barns ) and person-to-person infection is extremely rare, so the disease is not contagious.

C. burnetii is a very infectious organism with a very small quantity of the bacterium required for an infectious dose. The disease occurs in two stages: an acute stage that presents with headaches, chills, and respiratory symptoms, and an insidious chronic stage where mortality is high without treatment. Most infections clear up spontaneously, and treatment with antibiotics tetracycline or doxycycline will reduce the symptomatic duration and reduce the likelihood of chronic infection. A combination of other antibiotics erythromycin and rifampicin is highly effective in curing the disease, and vaccination with several specific vaccines are effective for prevention.

Until biological samples are collected from infected patients identifying the causative agent will be difficult. Advice to tending physicians should be to consider the agent as contagious until identity is established, and suitable measures taken to ensure no contact with bodily fluids ( including aerosols ) or contaminated surfaces. Laboratory staff should also be advised to take the necessary precautions to avoid skin contact and avoid creating aerosols when separating, centrifuging, or pipetting samples.

In this case the organism was identified in the laboratory, relevant organisations were informed about the outbreak, patients treated and the outbreak contained. The cause was traced to infected animals and the result deemed a natural outbreak.

Crtieria for considering a disease to be a possible deliberate outbreak together with environmental clues to consider have been drawn up and provided as additional handouts. None of the criteria or clues are definitive on their own for saying the outbreak was caused deliberately, with the exception of evidence that an organism had been either deliberately engineered (or prepared) for use as a biological weapon. Evidence of that may be difficult to obtain, but DNA (or RNA in the case of viruses ) analysis will invariably identify abnormal strains, and ones which may be particularly virulent which, in turn, will help to identify how the outbreak occurred.

There have been instances in the past where disease outbreaks have been caused deliberately but not identified by investigating authorities, or where accusations have been made that people were deliberately infected, but after rigorous analysis of the evidence it was apparent that the illnesses had nothing to do with the apparent biological weapon. In another instance even when evidence of a specific agent being handled in a military microbiological facility was identified as the cause of over 60 deaths, the government concerned still insisted that the deaths were attributable to infection due to consumption of infected animal carcases.

Moral: Identifying a disease outbreak as being caused deliberately may be less difficult than all agreeing that it is.