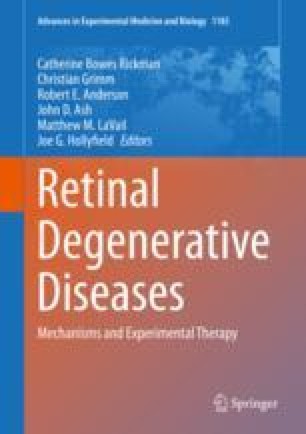 The Enigma of CRB1 and CRB1 Retinopathies

Mutations in the gene Crumbs homolog 1 (CRB1) are responsible for several retinopathies that are diverse in severity and phenotype. Thus, there is considerable incentive to determine how disruption of this gene causes disease. Progress on this front will aid in developing molecular diagnostics that can predict disease severity with the ultimate goal of developing therapies for CRB1 retinopathies via gene replacement. The purpose of this review is to summarize what is known regarding CRB1 and highlights information outstanding. Doing so will provide a framework toward a thorough understanding of CRB1 at the molecular and protein level with the ultimate goal of deciphering how it contributes to the disease.

41.1 Mutations in CRB1 Cause a Spectrum of Retinopathies

41.2 CRB1 Has Multiple Isoforms and Is Expressed in the Photoreceptors

The mammalian CRB1 gene was first cloned from the human retina and brain cDNA libraries (den Hollander et al. 1999). The original transcript described contained 11 exons, but a later transcript was discovered containing 12 exons encoding a type 1 transmembrane protein with high homology to drosophila Crumbs (den Hollander et al. 2001a). The 12 exon version of the gene encodes a protein consisting of a large extracellular domain and relatively short cytosolic domain. The ectodomain consists of 17 EGF repeats intermixed with 3 laminin G domains (Fig. 41.1a). The intracellular portion of the gene (exon 12) encodes FERM and PDZ binding domains (Kantardzhieva et al. 2005). The exonic structure of the gene provides a modular framework as each exon encodes one or several individual protein domains (Fig. 41.1a). This structure allows potential variations in exon usage to generate proteins with different domain compositions. For both EGF and laminin G, it has been shown that individual domains can confer ligand specificity (Tisi et al. 2000; Sun et al. 2015). This sets up the possibility that different CRB1 isoforms may have different binding partners, paving the way for multiple functions. This idea is not pure conjecture, as both mice and human have several isoforms annotated (Fig. 41.1b, c) and even more have been described (Quinn et al. 2017). In these isoforms, not only does the extracellular domain vary but cytosolic portions of the protein can be completely different or lacking entirely. It is yet to be determined the functional significance of these isoforms or where they are expressed.
Gene expression analysis from whole retina RNAseq (Hoshino et al. 2017) reveals that Crb1 expression begins in the developing retina, presumably by retinal progenitors, and increases until it peaks in the adult retina (Fig. 41.2a). Whether Crb1 is expressed in only Muller glia or both Muller glia and photoreceptors in the mouse retina has been contentious (Pellikka et al. 2002; Krol et al. 2015; Quinn et al. 2017). This is likely due to the fact that our understanding of CRB1 expression primarily comes from antibody studies where it can be difficult to segregate cell types that are closely apposed. RNAseq analysis of isolated rod and cone photoreceptors (Kim et al. 2016) shows that Crb1 is expressed in photoreceptors (Fig. 41.2b,c) in addition to Muller glia. This is an important point because knowing which cell types express the gene is critical for mechanistic understanding of disease progression in animal models. It remains to be determined whether CRB1 function is similar in Muller glia and photoreceptors.

Much of what we understand about CRB1 protein function is derived from drosophila Crumbs. The most commonly studied CRB1 protein isoform was chosen due to its close homology to the drosophila protein (Izaddoost et al. 2002). Drosophila Crumbs localizes to the stalk of the photoreceptor and is critical for positioning and maintaining adherens junction (AJ) integrity (Izaddoost et al. 2002; Pellikka et al. 2002). In mammals, CRB1 serves a similar function at the subapical region of the outer limiting membrane AJs between photoreceptors and Muller glia (Pellikka et al. 2002; van de Pavert et al. 2004). The cytoplasmic domain encoded by exon 12 of CRB1 interacts with cell polarity protein Pals1, which organizes complexes to regulate apical-basal polarity (Kantardzhieva et al. 2005). Relatively little is known about the function of the extracellular portion of the protein including what the interacting partners are.

41.4 Crb1 Mouse Models Do Not Recapitulate the Human Disease

There are two prevalent mouse models that disrupt the Crb1 locus and are used to model retinopathies. A spontaneous point mutant line (rd8) was discovered that contains a nonsense mutation in exon 9 of the gene likely resulting in a truncated protein (Mehalow et al. 2003). Mice homozygous for the rd8 mutation begin to show pseudorosettes in the outer nuclear layer detectable as early as 4–6 weeks of age (Mehalow et al. 2003; Mattapallil et al. 2012). Despite these ocular lesions, degeneration occurs slowly over the course of several months (Mehalow et al. 2003). A Crb1 null model (Crb1−/−) was generated by replacing exon 1 and the upstream promoter with a targeting vector (van de Pavert et al. 2004). This essentially eliminates generation of transcripts that use exon 1. However, it is unclear what effect it may have on putative transcripts that do not use exon 1 (Fig. 41.1b, c). In the Crb1−/− model, pseudorosettes developed by 3 months of age, and at 6 months of age large rosettes were apparent along with photoreceptor degeneration (van de Pavert et al. 2004). A notable feature of both rd8 and Crb1−/− models is that they fail to recapitulate the aggressive degeneration of the LCA and early-onset RP patients, causing one to speculate whether the disconnect in phenotypes is due to modifying genes or hypomorphic alleles.

The variability of phenotype and age of onset of CRB1 retinopathies highlights the necessity of taking a bottom-up approach toward understanding CRB1 function. The apparent lack of correlation between mutation location and phenotypic outcome has perplexed researchers for more than a decade. The phenotypic variability is often explained by disease-modifying genes that act in concert with CRB1. While recent work in animal models has gained traction with this hypothesis (Pellissier et al. 2014; Luhmann et al. 2015), there are still several outstanding questions regarding CRB1 at the molecular and protein level that warrant further investigation.

Knowing the temporal and cell-type expression of CRB1 is paramount for understanding the basis of CRB1 retinopathies. For instance, does early expression by retinal progenitors contribute to the disease? Is the function of CRB1 in photoreceptors versus Muller glia equally important? Further, accurate gene quantification relies on proper gene annotation (Zhao and Zhang 2015); correct annotation of the CRB1 gene is necessary for expression analyses and determining the utility of current disease models. Finally, we need a detailed understanding of CRB1 protein functions to determine which are most relevant to the disease phenotype. By improving our understanding at the gene and protein levels, we can aim to more accurately diagnose CRB1 retinopathies and lay the groundwork for developing a therapy.